Fish of the Day yesterday released under the dock. I can still see him down there. 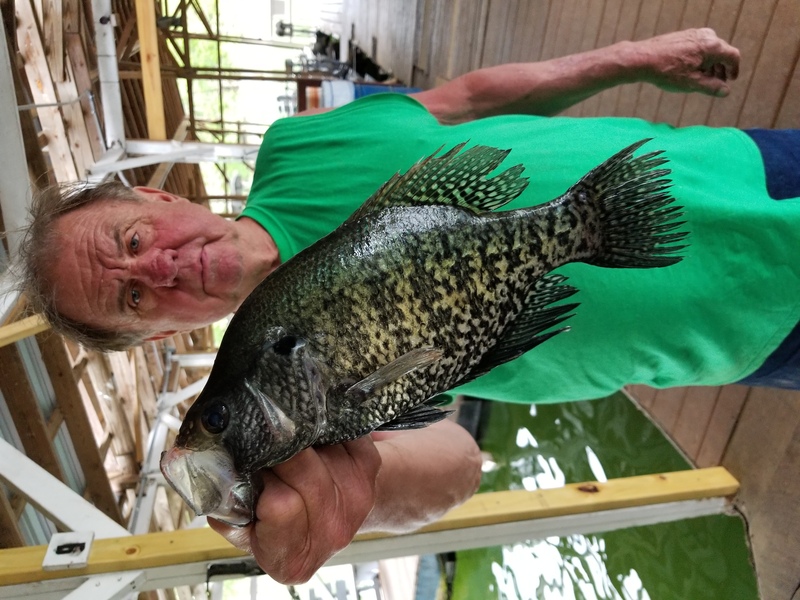 The lake level is 565.47 and has risen about 3-1/2 inches in the last 24-hours with no generation since last evening. The have opened the spillway gates  at Beaver lake just before it went over the spillway as predicted and are still running Table Rock as fast as they can and filling Bull Shoals rapidly. Norfork is not on the Chain of Lakes and they are pretty much letting it rise so not add to the high water on the White River at Newport. They have let it drop from over 26-feet which is flood stage to just under 24-feet which is minor flood stage. Beaver is 7-ft. above power pool, Bull Shoals is 13-ft. above, Norfork is 10-ft. above and Table Rock is 2-1/2 ft. above. Bull Shoals can hold a lot of water and cetainly gets it's chance to prove it being below Table Rock which they keep as close to normal as possible to protect Branson and the Landing. It certainly would have been a good idea to drop the lakes in the winter and keep them from rising with the spring rains as long as possible instead of holding and hoping and flooding downstream in May after the crops are planted. A friend told me that they were called by the Corps and their camping reservation for Bidwell Park had been cancelled and that there would be no more until October. I do not know much about camping after being in the the Boy Scouts and Military but maybe they are anticipating letting things flood again. They are not flooded yet.  We have not had any rain for several days now and the rain scheduled for last night and this morning has not amounted to much except a lot of noise but it is raining now and very dark. I had to check out a rental boat yesterday and took a fishing pole with me. Most resort owners do not have much time for fishing now and I am not an exception and it is a good thing that I have some of the best fishermen on the lake giving me daily reports this time of year. I went to the first place on the main lake and caught nothing for about 1/2 hour and went back in a creek on brush in 23-ft. of water and found a lot of crappie in 23-ft. on brush. I caught my limit of keepers and about three limits of throw backs and started to move again when a distressed boater needed help and I had to tow him to the Cranfield boat launch ending my fishing for the day. They were nice fellows from Missouri. I did see a line if debris right in front of Cranfield campground but was able to get through it by going slow. It was heading downstream towards the Island. Most of the junk at the mouth of Blackburns creek the day before was gone and the lake overall in this area was in pretty good shape at least where I went. There was no brown water and the water near the shore was clear and I could see my lure down several feet. There was very little debris overall and it was easy to get out of what there was. The people that I talked to all caught fish with bass being right on the bank behind the buckbrush as well as around docks. I released all of my crappie under the dock and they all swam right into the brush under there along with other crappie, several bass, big gizzard shad and many bluegill. The big bluegill have just moved in. There was at least a 6-lb bass right by my boat lift when I came in. The water temperature was about 68 degrees and should rise again today with last night lows in the 60's and daytime highs near 80 this afternoon after things clear up. Many crappie are still full of eggs and a lot of short ones are everywhere. It is time to set out a trot line with live bait and catch some catfish. The water is not high enough for limb lines yet but most of the trees near the shore are dead anyway as is the buckbrush from being under water too long. The top water bite is a little disappointing so fat but there is some early. People are still killing the stripers that are left even though they are small and seem proud to do so. When they are gone they will have to leave here and go decimate another lake. Blackburns big pool is nearly full and will be ready to open soon and you can still get a one bedroom cabin for $59/day with a free boat stall.  I highly recommend Clean Cut Tree Service. They have the best equipment, fair prices and are very knowledgeable.