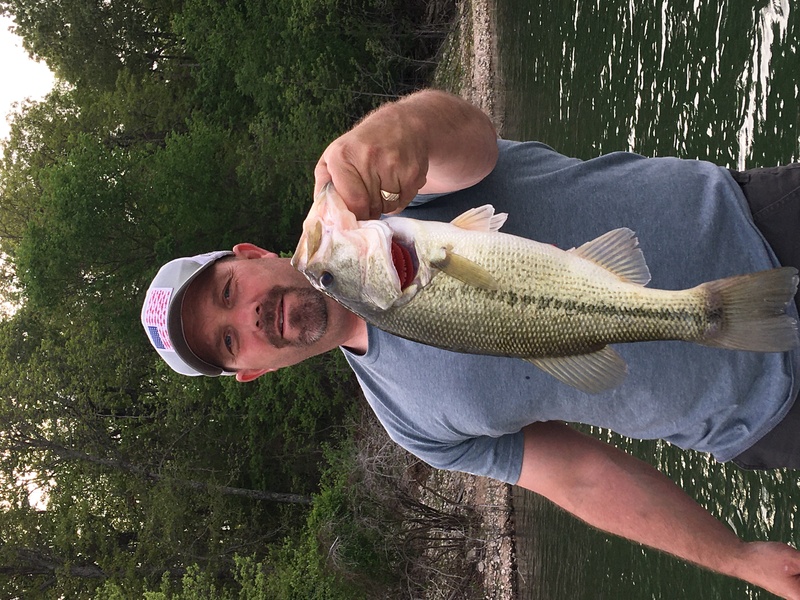 Mickey McGee is a good friend and long time repeat customer. He and his crew are always welcome here. They can catch fish too. Some of yesterday's catch released. 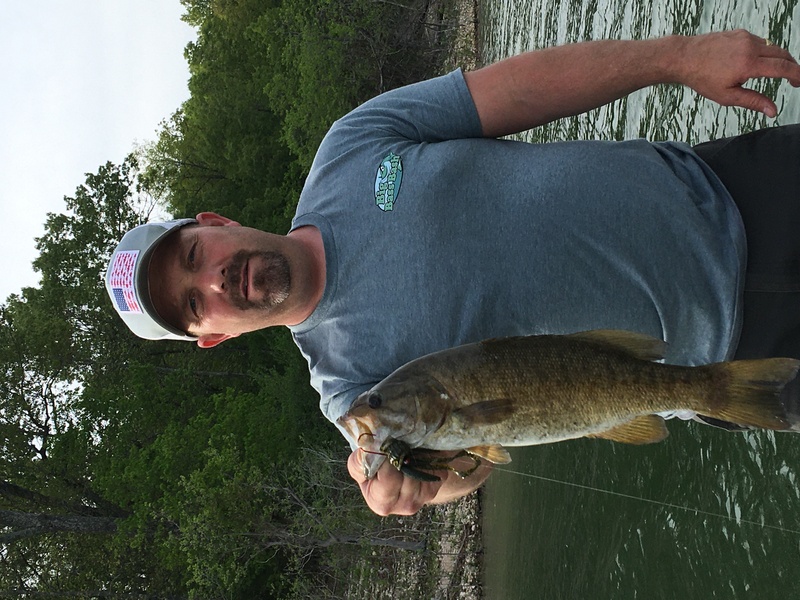 The lake level is 562.51 and has risen 4-inches in the last 24-hours with no generation since last evening. We have received just a little rain so far today with more on the way and it is very cloudy but people are getting in some good fishing time. I has a 66 degree water temperature in Blackburns Creek just a few minutes ago. Smallmouth bass are around the Boy Scout Camp and crappie are in Echo point creek and Hensley's. High numbers of throwback pre-spawn crappie are being caught now in brush in 30-ft. of water just under the 10-inch limit. Several crappie have not spawnwd yet, but bass, shad and carp are spawning everywhere and the creek is full of fish. Things are about two weeks later than normal what ever that is.  Live bait trollers are bringing in several small stripers and hybrids as predicted with the top-water bite and shad spawn. I have never seem so many people so proud of such small fish but they just have not been around here long enough to know what things were like when the big stripers were in high numbers. I have seen Guides like Darrel Binks, James Nichols and Gerry Sperry bring in many fish over 40-lbs back in the early 1990's when they were plentiful. 30-pounders were common and 15-pounders were throw backs. Over fishing and too many years of high water for extended time with low ozygen have taken their toll and nobody seems to care except to kill the ones that are left and brag about it. A program of catch and release for them needs to be started and also not fishing for them in deep water. The stocking program for them resumes this year and it will take several years to even approach where we were but there is no better time to start than now. It will be a waste of time to stock them if things continue as they have been for the last several years. They are what sets Norfork lake apart from the average lake and I want them back even though I do not fish for them anymore. It used to be really fun to go out on a warm November night with the full moon shining on the bank and catch a 30-lb. striper. The new generation need to experience this and us old folks should not rob them of that. No better way to spend an evening. The lake is clearing every day and we need it to drop 3-4 feet to stick some of the debris on the bank and have the rain stop. A little generation would not hurt but I do not expect that for quite a while. Overall fishing is just fair but most everyone is catching some fish of several different species. Things could be a lot worse and all area lakes are experiencing the same condition but Table Rock is hogging all of the generation and that water is going into Bull Shoals. If we get no more big rains things could straighten out by early summer but that could be a stretch. Fishing is the least thing that will be affected and high water does not affect fishing much except when it comes too fast. We have all had our Covid shots at Blackburns and hope you have too but you can still social distance here with all cabins being individual with no duplexes and the lake is big and so is the pool. I will start to fill it next week. People are really wanting to get out and you can come here. We will not charge you too much. If you are new to Blackburns you can meet some of our many repeat customers and join in on the fun. We help each other catch fish and the chikdren can meet new friends. Blackburns is your fishing and family headquarters for Norfork Lake and especially welcome Veterans and Police. Compare prices.