Fish of the day released under the dock. 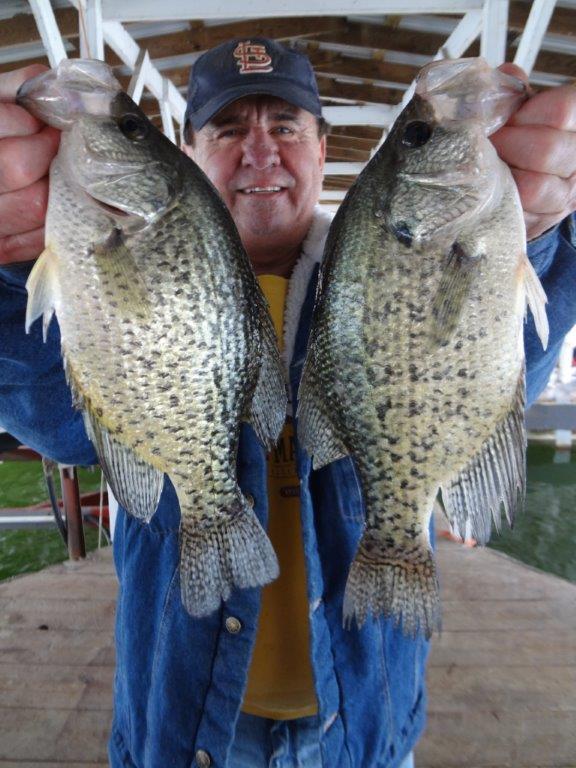 The lake level is 557.25 and has dropped 1-1/2 inches in the last 24-hours with one generator running continuously. The White River at Newport is now 15-ft. and it keeps lowering as does the discharge. It was a cool and blustery morning yesterday and got worse as the day progressed. There were a few rain drops and then a few snow flakes with a strong north wind by afternoon with dropping temperatures. The cold front came in with a vengence and the skies cleared by evening and it got cold with a low of 29 this morning. It was a record low. Global warming was not a problem. The high pressure has settled in now with sunshine with lighter winds but still breezy and cool with highs to only be in the 50's. It is to be in the high 70's again by later on in the weekend after another cold night tonight. Another low pressure is to move in later in the week with a good chance of rain before the weekend. The lake is dropping, the water temperature is dropping and the fish do not know what to do or at least what I think they should be doing.  I went out to a known walleye point and caught no walleye but some big crappie on the spoon in 17-ft. of water near the bottom and they were full of eggs. I have not a clue on why they were on the main lake in deeper water. No wonder trollers are catching them. Another thing. Where are the big schools of shad? Before and after the shad kill in February they were everywhere. Then they were in the backs of the south facing creeks with the south wind being predominate and had a lot of fish on them. They were coming in under my dock in March and filling the stalls and attracting crappie, bass and catfish. Now I have none except some big gizzard shad around my underwater light. I did have a big school of bass about 4-5 inches long come in under the dock yesterday and I also do not know where they came from. They had to be last yesr's hatch but did not grow very fast. With the large amounts of shad and the warm summer I would have though they would have been larger. They could have been Kentucky's but I could not tell. Everything is just mixed up this spring. Black crappie spawn first and the black crappie that I am catching are still full of eggs. They like to spawn just a little deeper than the light penetrates and just out of the clear water. I do not know how they can do this with the creeks going from clear to green overnight and then back again with the changes in generation, wind and boat traffic.  I do not kill very many fish but I am finding no spawned out anything except for walleye. There are very few big White Bass compared to two years ago but the few that I am catching are still full of eggs and they should have finished spawning by early March at the latest. Largemouth Bass eggs hatch in two days at a 72 degree water temperature and five days in 66 degrees and we have not reached that yet and the temperature is going in the wrong direction. The big bass that were under my dock pre-spawn feeding on bluegill left for a few days when the water warmed and are now back. It is hard to figure out what is going on if you are not out there every day. It is fun to figure things out. Maybe I should just tie on a lure and drag it all over the lake until I catch something. It does not work for me but to each their own. Things they are changing but a lot of fish are being caught. The one thing that is not changing is the price at Blackburns. You can still get a cabin for $59/day and your first boat stall is free here. We do not promote smoking but if you do you do not need to bring an umbrella to go outside. All of our cabins have big covered porches and all are individual with no duplexes. Duplexes are ok if you are lonely and need close company with your neighbor but other wise not so good. Come on down. We will not charge you too much.