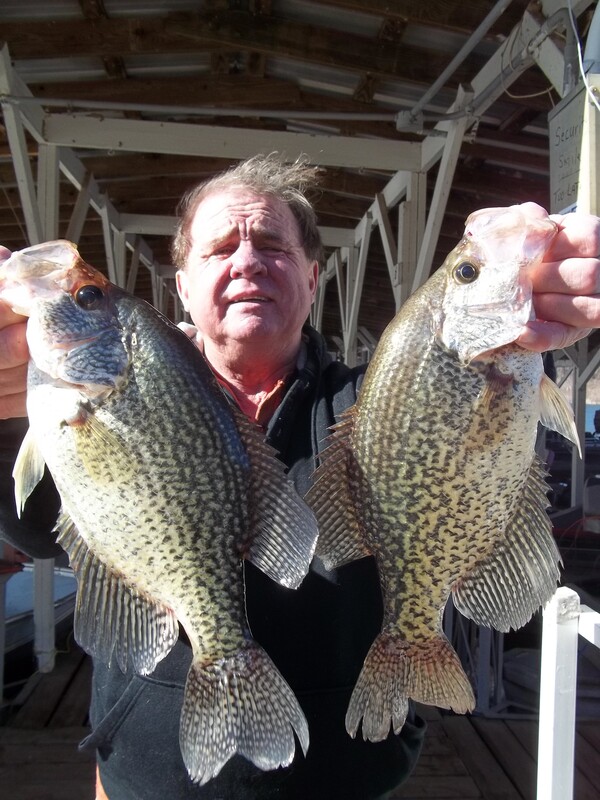 The lake level is 557.60 and has dropped 1/2 inch in the last 24-hours with one generator running continuously. What you see is what you get so do not expect the level to drop much anytime soon. They are still dropping the White River at Newport and slowing the discharge and are heading for the stupid number of 14-ft. It is now 18. We received 0.2 inches of rain in the last couple of days and are fortunate. It is good to have a stable lake level during the spawn. The cool weather and nearly stable surface water temperature has dampened the top-water bite and pushed back the peak. If they come up it is only for a short time now but they want to. It is now in the early 60's on the main lake and all over the place back in the creeks.  Normally striper fishermen would be killing a lot of fish now and I expect more soon. Most of them have turned into crappie fishermen and are unable to catch stripers of any size. If they do they are few and far between.  They are now showing off pictures of stripers under 10-lbs. and act proud to be killing them. I would like to see the limit dropped to two per day until they make a comeback. The hybrid stripers are more able to handle the low oxygen times of late summer and I would also like to see more of them stocked as their survival rate is much better as the area lakes are being managed to stay high for long periods of time. The fishing pressure is as high as I have seen it for this time of year. Fishermen are everywhere. There is a one day tournament today for Norfork lake fireworks funding and they have 75 boats signed up. Blackburns has several customers participating and we wish them well.  All fish are to be released. It would be good to figure out a way to weigh the fish immediately and release them instead of taking them away from the nest so predator fish can eat the eggs. They should do well with almost everyone catching fish here at Blackburns.  The weather is to be well below normal for several days so do not expect any water temperature increase with the cool nightime lows. The normal high is now 70 and we are not to get to that level for a week and lows are to be in the low 40's and high 30's with a chance of frost in low lying areas. Bass, crappie and walleye fishing are the best bites with bluegill starting. Catfish are not far behind. Jugs and throw lines are catching some nice fish. Pigeon, East Pigeon and Briar creeks are producing crappie as well as walleye. Float creek and Big creek are good for bass as well as Blackburns creek. Some big female crappie are still out in deeper water waiting for the males to make nests so this could go on for a few weeks. More and more will then move to main lake brush after spawn. Catch a few, release a few and leave some seed. Showing pictures of huge stringers of dead fish does not enhance anyone's image anymore. People just do not like it unless they are just meat hunters and do not care about anybody else. The numbers of fish are not limitless. Just ask the striper fishermen. We have a good fishery here and we want to keep it that way so everyone can have fun and enjoy the outdoors. Blackburns still has 1-bedroom cabins for $59/day while others are trying to get $100/day for duplex cabins with no porches. We like our customers here and do not waht to charge them too much. That is no way to treat a friend, at least not here.