It does not get much better eating than this but I released it anyway. 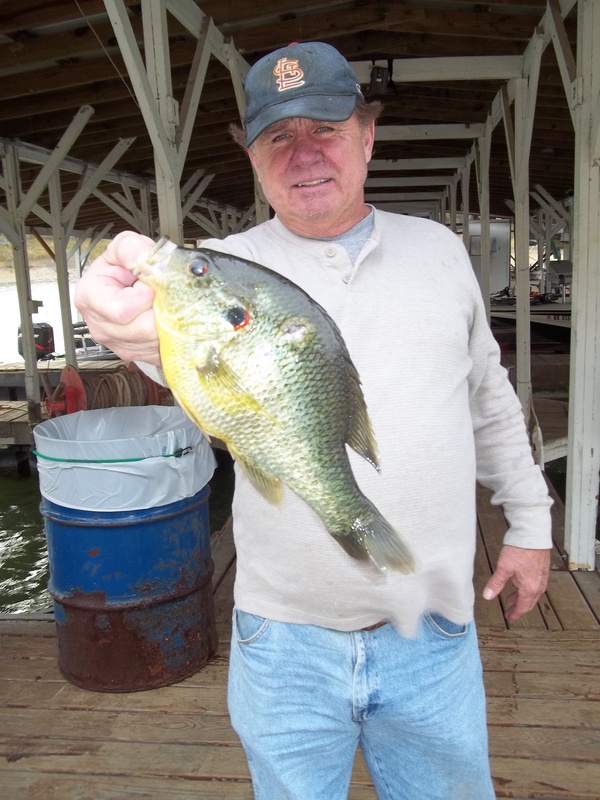 The lake level is 557.70 and has dropped about 1/2 inch in the last 24-hours with one generator running continuously. They continue to drop the White River at Newport while at the same time slowing the discharge and now it is just above 19-feet and it looks like they are headed back to that 14-ft. level for some stupid reason that nobody knows. Keep it up as high as possible and hold and hope is the game. It is almost like they want to flood out all of their own campgrounds. It is just government money anyway and is not real. They cannot even manage when there are drought conditions let alone big rains and some people want bigger government. I do not promote killing large numbers of fish or take pictures of dock floors and huge stringers of dead fish but it is a good thing that Blackburns Has two fish cleaning stations at the dock. Almost everyone is catching fish and they are both busy most of the time. No waiting in line for the slow guy here. The cool weather and predominately north wind has now blown the plankton and shad into the creeks coming into the river from the south and that along with most of the bass and crappie spawning or wanting to spawn already making nests in the creeks has really increased the bite in these areas. One couple reported catching over 70-fish, releasing most or f them and never leaving Blackburns creek. Flatheads are still being caught on jugs using small bluegill but channels are also showing up. Throw lines are also working. Creature baits, small grubs tipped with minnows and jigs cast to the bank are catching most of the fish. Some walleye have moved to main lake points in 15-18 ft. of water on the spoon near the bottom. The top- water bite has not hit full stride yet with most of the fish caught there being bass in early morning at sunrise. It is to be cool for the next several days but not cold. The nightime lows are to be in the early 40's and that will not allow the water to warm. It is just over 60 now on the main lake. Blackburns is the place to be so come on down. We will not charge you too much. Compare prices before you pay too much elsewhere. If you have extra money give it to Disabled Veterans.