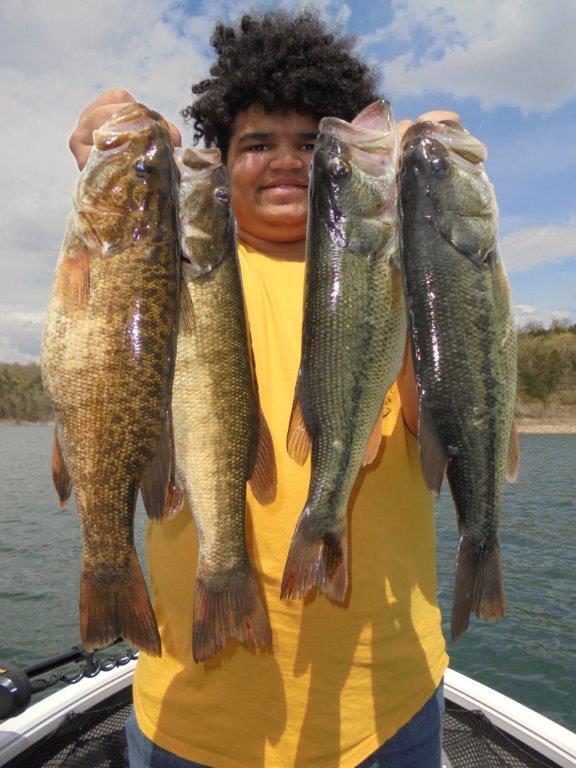 The lake level is 559.07 and has dropped a little over 3-inches in the last 24-hours with both generators running continuously. The lake surface temperature was just under 60 in some places and in the low to mid 60's in others. The water is trying to clear and is at a good color for fishing on both creeks and main lake but has been slow doing so as it has been slow warming up. The ambient low was 65 last night and that will really help things out. The rain is moving into Baxter County now and it looks like we will get a little and maybe a storm. We do not need the wind but a little rain will not hurt. I never thought I would say that. The lake has dropped about 2-feet from it's high and that was badly needed and we need more. They are dropping the level of the White River at Newport  very slowly now and it is at 22.35 and is where it should have been all winter and we would be at 552 and able to hold another big rain. The fishing is getting better and better with bass and crappie being the best with catfish not far behind. White Bass are disappointing and are not near what they were before their kill-off a couple of years ago. They are the easiest to catch and people that have trouble catching fish could almost always catch them. Not so now. They spawn several times a year and should make a comeback with the goodly amount of baitfish in the lake. The shad kill this year made a dent in them but there is still plenty of feed with the absence of the big stripers scarfing them up.  Some male crappie have moved to the bank and shallow wood to make a nest and the females are mostly full of eggs with blood lines wanting to spawn. I cleaned one big female crappie yesterday with no bloodlines that I had hooked deep. It still had several days before spawn left. Others are ready. If all of the males are caught off the nests there will be nothing to fertilize the eggs and protect the eggs and small fry. Catch a few, keep a few and release a few. This may be the easiest time to catch them but not the best time for the population which I would like to keep where it is. Norfork is a good crappie lake and known for big ones and not high numbers. There are few places where you can catch 14-16 inch crappie regularly and we need to keep it that way. There are more and more boats out there everyday and the fishing pressure is increasing over the years and the boats are getting bigger and bigger. Not sure how much I like that but it is what it is.