Brian Deardoff with the fish of the day. He says he will try for bass and crappie later. 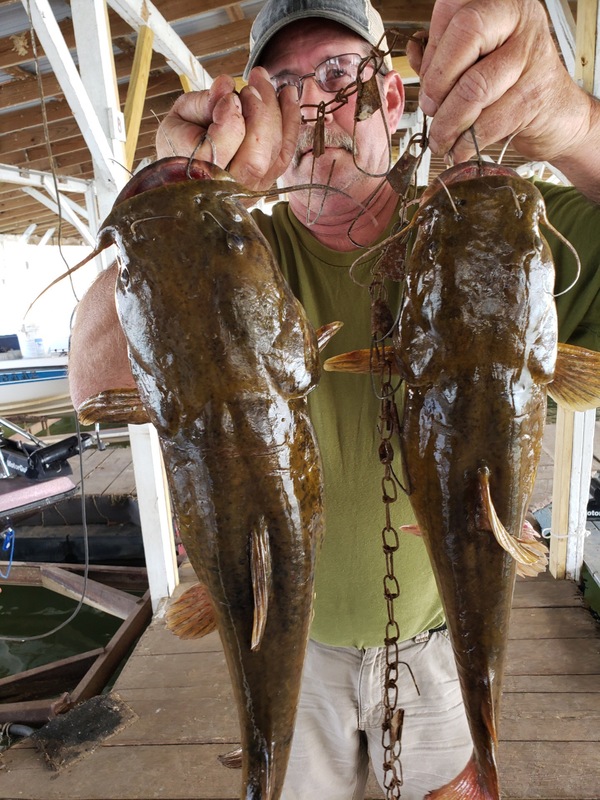 The lake level is 560.82 and has dropped a little over an inch with both generators running most of the time and just a few hours of just one. They are actually trying to keep the area lakes from rising but mostly the emphasis is on getting Table Rock back to power pool while the others rise. We may drop more quickly when they accomplish this and they are close. We could be dropping much more quickly and have not received any rain for a week with none scheduled for the next several days. We will be ok unless the area around Gainsville gets a gully washer like in 2017. Nothing could have helped things when this happens except that we were at a 546 level when it happened and it would have been more of a disaster if we had been at 560 like now. It is always good to lower the level in the winter to the 540's and not be above 552 at the end of April when they start the stupid 14-ft. rule at Newport. When it changes to 12-ft. the 8th of May there is not much chance the lake will drop much unless it is already very high. Then they will hold it all summer. I do not want the creeks to clear very much until the bass spawn is over. When it is clear the sight fishermen catch the male bass off their nests and it does not matter if they are released later or not the damage is done. With nothing to guard the nests the eggs or small fry have a life expectance of about 1-minute with hundreds of bluegill and other fish laying in waiting for an open nest. The other thing that hampers the spawn is rapidly rising or dropping of the lake level. Spawning fish will only try to change nests a couple of times before they give up and just spray them out in open water without being fertilized. A nice stable lake level in Mid April continuing until early June with water in the buckbrush makes for a very good spawn even though most of the buckbrush is dead from being submerged for so long. We are to get a very cold low temperature tonight and tomorrow night with freeze warnings both nights. This is not unusual for late March and early April but will not help the blooming flowers, shrubs and trees. I do not plant my garden until early May as Blackburns is in a low valley close to the lake and gets a few degrees colder than higher elevations. I have seen frost in early May several mornings after clear nights but normally does not harm much except tomatoes and other delicate plants. There is just no need to get things out early as we will get plenty of heat later. The lake surface temperature is staying in the mid 50's but should come up with ambient temperatures reaching nearly 80 by Sunday. It looks to be a very nice weekend. These cold fronts just keep coming through. People that used to troll for stripers are not catching much and are now trolling for crappie. I am still seeing people taking pictures of dead stripers that barely reach the 20-inch minimum. They need to smile as they are ruining the future.  When you see pictures of trollers with a few crappie usually means they have worked hard for them all day and are trolling the shoreline for hours. Sometimes they have been out for a couple of days with nothing and finally catch a few accidently. Bass, crappie and flathead catfish are the best bite now and can be caught on small jigs, grubs and soft plastics near the bank part way back in the creeks. Check Pigeon. East Pigeon, and Briar Creek for crappie. It looks like warmer water, April 15th and spawn will all be in effect at about the same time. We are catching bass, crappie and Flatheads everyday here at Blackburns and still have cabins for $59/day and a free stall for your boat. Can't beat that anywhere. Mowed the grass for the second time yesterday.