Mike caught a flathead on a live bluegill in Blackburns Creek yesterday. That is a good sign. 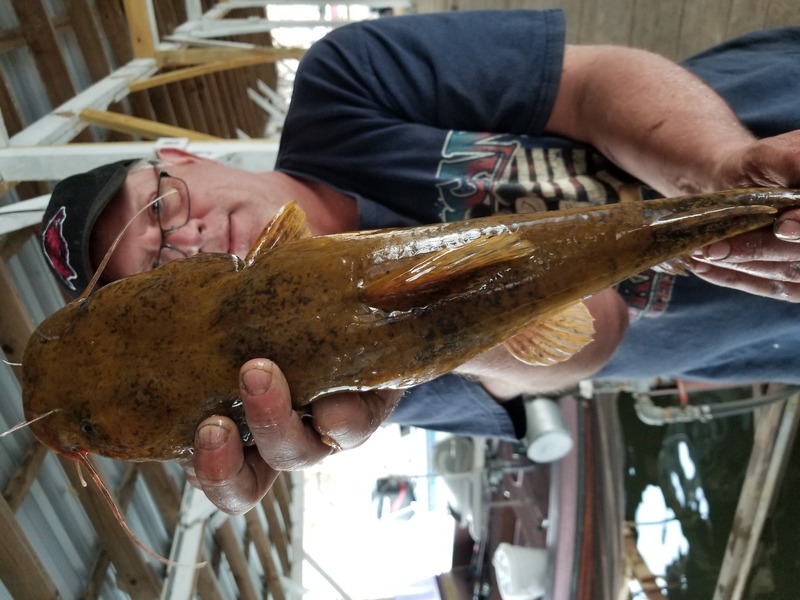 The lake level is 560.94 and has dropped 3/4 of an inch in the last 24-hours with both generators running continuously. It raises when they cut down to one generator or quit generating but drops very slowly when both are running.  There is not much rain in the forecast for the next several days and I really hope they keep generating. Cold fronts and wind just keep coming through followed by high pressure and warm days but very cool nights with clear skies. We are to get another frost later this week. It is not time to plant gardens yet. The surface water temperature is still in the mid to upper 50's depending on where and when you check it. We need to get this moon smaller and warm nights in the 60's to really get things going and get the top water bite started in earnest. Blackburns had several fishermen out yesterday and they caught a few fish but not a lot. Bink reports doing great on Saturday but catching some but not great yesterday. This gusty wind is getting old but better than in many other places who are getting flooded out and windy. Several crappie have moved back into the creeks and so have many bass. I am not catching much on the main lake but just a few on main lake brush in 23-25 ft. of water about 9-feet down but you have to work for them. Much of the lake is still a little brown with some small debris but not bad. The brown is settling out very slowly for some reason but is getting there. The lake sure has changed with the very heavy rain in late April of 2017. Dawt Mill dam is now gone and the runoff in Missouri comes right down to Arkansas with not much to let it settle out. I think every big log from Missouri now resides in Arkansas. They do provide good spawning grounds for crappie though. With the buckbrush and most of the trees dead near the bank from being submerged in water for so long it will take several years to replentish to where it was if it ever will. You can be sure of one thing. If the lake ever gets down near 550 for an extended time in the spring we will have a bumper crop of cockle burrs. I have not missed them much. People just keep killing small stripers and a big one now is 15-lbs and not very many of them. It looks like this will not stop until all of them are gone. They should be criticised for killing stripers rather than bragging about it. Nobody wants to see huge stringers of dead fish anymore. I am sure that I do not. Go catch a few, eat a few and release a few. Walleye, crappie, Kentucky Bass, flathead catfish and bluegill are the best eating. Blackburns is very busy and we like that. We have things all fixed up and did not try to sneak a price increase in on you. We will not charge you too much. If you are staying at a place where you are nearly the only customer you are probably paying way too much.