Mike with some of yesterday's catch 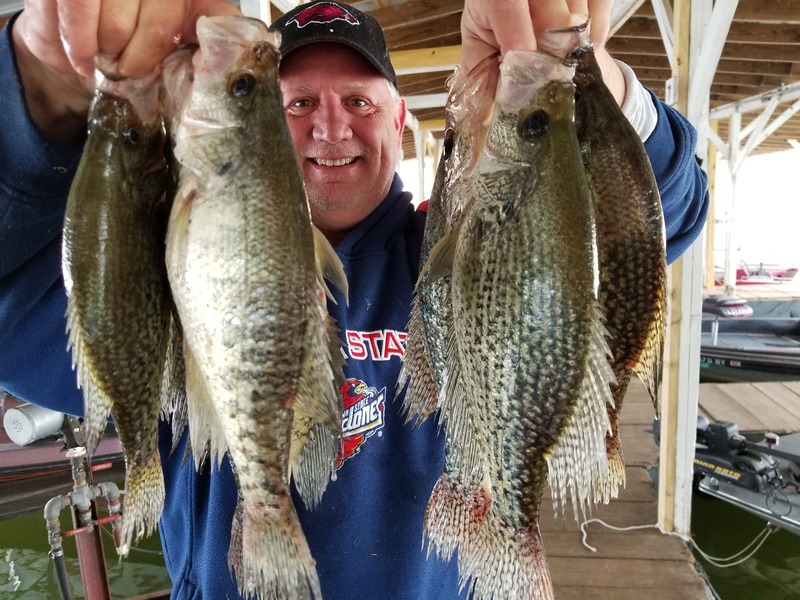 The lake level is 557.10 and has risen 8-inches in the last 24-hours. At least there has been continuous generation . We did get another 1-inch of rain last night and the creeks are running again but not nearly as fast. The lake has come up a total of 3-1/2 feet since the rain started and we have had a total of about 3-1/2 inches in the last four days. It is still raising at the rate of about 1/3rd of an inch an hour. We are to get more rain Wednesday. It has been a total surprise to dam management that it rains here in the spring. Maybe they can take this into consideration next year and make some changes. I doubt it though.  Blackburns creek had started to clear again last evening but I have not been out yet today. One of our customers was fishing  Briar Creek yesterday afternoon and reports a slug of debris was at the channel swing near Twin Coves and was heading south towards Cranfield. It looks like last night's rain will bring it on down. I went to Panther Bay for the tournaments weigh-in  and there were two going on about 4:PM. The water was very clear there. They reported the fishing was not as good Sunday as Saturday but I watched one person check in five fish weighing 17.5 pounds of nice largemouth bass. That is not bad. The Norfork Lake Bass Club reported about 43 boats entered. I did not stay for the entire weigh-in and just wanted to get an idea of what was going on. These boys know how to fish. Mike Eakle caught some nice crappie and bass yesterday fishing on Blackburns brush piles and Roger Moody caught some bass.  It started to rain about 5:PM and they came in. I had to work on cabins all day but will check it out later. We are to have a couple of days of dry nice weather.