Fish of the day yesterday by Scuba Steve 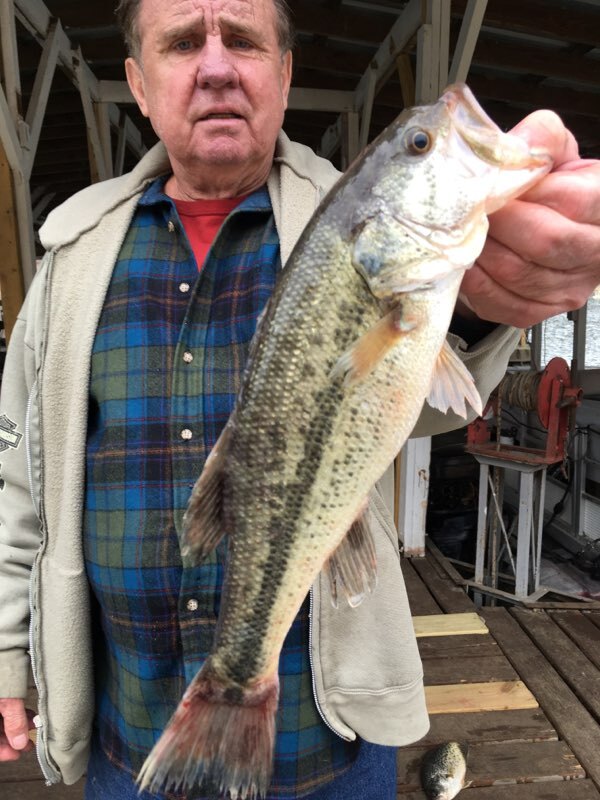 The lake level is 556.46 and has risen a total of three feet in the last two days of rain. They started generating at this time yesterday and have run continuously since. The creeks have almost quit running and the lake is still rising about 1/3 of an inch an hour. We have brown water now out past Blackburns Dock but the north wind has kept it from going on out to the main lake. The generation pull and southeast wind will move it out to dissipate. It is not real muddy just brown. The rain is supposed to go away after tonight and be sunny and warm for a couple of days and then rain again on Thursday. It sure would have been nice to have had the lake level down to about 548 going into the rainy season and then we would just be a little lower than normal instead of one big rain away from the magic mark of 561 where it starts to be a problem. Nobody thought about doing this but maybe someone could start a discussion about implementing this radical policy in the future. Duh. I got the utilities back on in then rest of the cabins yesterday at the urging of management reminging me that the last four opened up last week were full already and she was turning away customers. Some are leaving today and we have openings starting today so come on dow. We will not charge you too much. The surface water temperature was 52-54 when I went out last eveing. I got my work done for the day and waited until all of the bass fishermen were off the lake and they were everywhere until about 4:PM. I fished main lake brush in the clear water and caught bass and crappie and came in. The rain did not seem to affect the fishing much. I do not fish brown water but some do. I like it where the brown meets the clear right at the transition but to each their own. I just fished the Blackburns Creek area and everything was fine. They need to keep generating and stop the rise but I do not know if they have it in them but I expect not. I caught some nice fish.