Fish of the day yesterday by Scuba Steve. Caught more too. All were released under the dock. 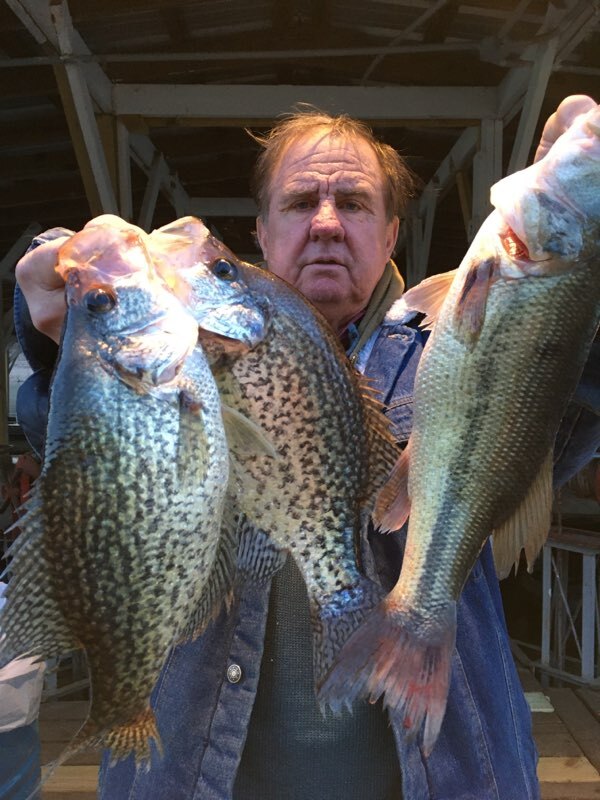 The lake level is 554.72 and is just a touch higher than this time yesterday. They quit generating last evening and have not started up again. They are doing an excellent job of holding the area lakes up as high as they can for as long as they can even in the dead of winter with no excess rainfall. Go figure. The surface water temperature was between 47 and 48 yesterday when I went out and it was a nice day with medium to light winds and an ambient temperature near 50. Not bad for early February. The arctic cold front that is to bring polar air this weekend to the south central states has caused a lot of people to prepare for it and I sure hope the weather man is wrong. I think we need to fire him as well as the ones managing the dam levels. He is wrong more time than right for this area. I have watched many people watch their phones and mill around, cancel boat rentals on what turned out to be a nice day worried about not being able to get a full day in. If I am concerned, I watch the skies in the northwest and hang close to Blackburns Dock and come in just before the heavy rain starts and keep away from the in between the bridges area which is the windiest place on the whole lake.  It is cloudy and warm today with a chance of light rain and a good day to fish. The bite was pretty good yesterday with everybody catching fish. Mostly bass, crappie and small stripers with a couple of 6-lb. hybrids coming in. Walleye are scarce now for us. It is getting near spawn time for them and white bass and the white bass will school and start their run up stream and into shallow water when the temperature is in the 50's. The walleye run on Norfork used to be much larger several years ago than now. You could tell when it was happening when the trucks would be lined up along the bank on highway 160 in Missouri. Now not so much but the overal numbers are higher now. I wish more were stocked since the fishing pressure is so high for them, but at least some of them reproduce unlike stripers and hybrids which are semi-put and take. The white bass are very prolific and are the go to fish when nothing else is biting or the bite gets tough for some people. They will bite anything with a spinner on it including road runners and rooster tails. They also cannot resist a spoon anywhere near them. I am glad they are making a comeback. It is good for novice fishermen to be able to catch anything consistently and they are fun to catch. Norfork is a good lake and is full of many different varieties of fish.