Mike Eakle with some good ones caught yesterday on the Bink's Spoon in 35-ft. of water near the bottom. 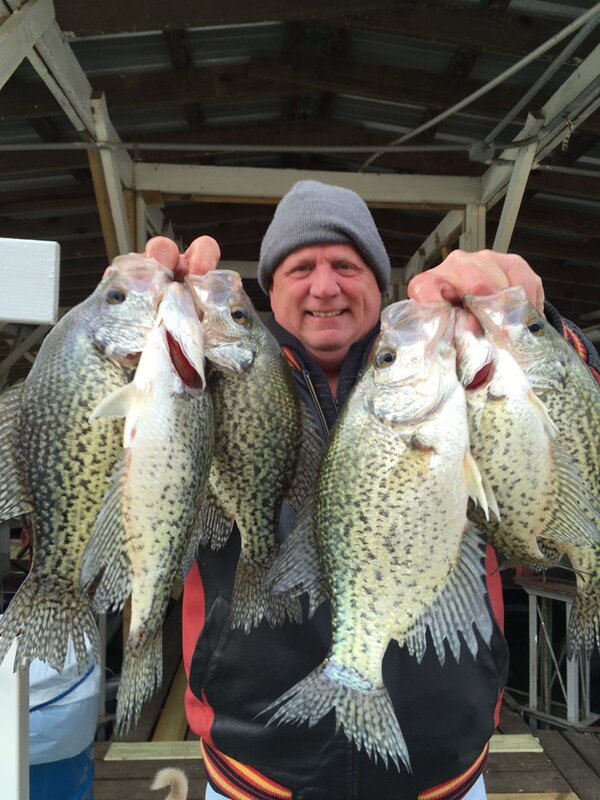 The lake level is 554.54 and has dropped 1-1/2 inches in the last 24-hours with generation most of the time. They quit last night but have started up again this morning. I suspect they will get it down to the power pool of 553.75 and then slow way down again for some unknown reason. At least that has been what they have done in the last few years when they changed from the policy of drawing the level down in the winter to make room for spring rains to holding it up all winter and allowing it to flood and open the spillway gates ruining the crops downstream and holding it up all summer to prevent replanting.Government work at it's best and some people want more government. It was a beautiful day yesterday with a high temperature of near 50 with medium winds. I tried crappie fishing in brush about 20-ft. deep and could catch nothing but small fish. Went back to the 35-ft. level just outside the brush and caught several nice ones. There sure are a lot more species of fish feeding on shad in the open water now that the big stripers are almost gone. Their absence has sure changed Norfork Lake fishing with other kinds of fish thriving. The bass are getting bigger and bigger and the good bass fishermen are doing very well with more fish in the 5-6 lb. range being caught this year than I have ever seen before. Even the Kentucky Bass are approacing three pounds. Crappie and catfishing is about the same but more of both are in deeper water. Trollers trying for temperate bass are catching a much more variety than before. White Bass are making a comeback but there are not nearly as many as a few years ago. Bluegill size and quantity has been very good. Overall fishing has just been fair but some nice fish are being caught every day. The average ambient high temperature is on the rise and has moved from it's low if 44 to 46. The surface water temperature was back up to 46-degrees yesterday and as it rises there will be more shad moving back further into the creeks with game fish on them. The walleye run up the river in February is not near what it used to be a few years ago and the ones moving up there are mostly small. I do not even go up there for it anymore no matter how much I like walleye fishing but the overall numbers and size are getting better and I caught more last year than normal. The best time for them is now in May and early June where they will be on brush in 16-20 feet of water near the bank as the thermocline forms. Norfork is a good fishing lake and the more you fish it the better it gets plus you can stay at Blackburns where you do not have to pay too much. We are in a central location on the lake and close to town and services.