They all swam away. 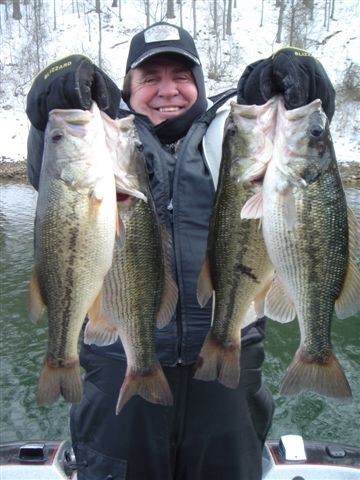 The lake level is 554.78 and has dropped two inches in the last 24-hours with both generators running. There are no spillway gates open. The surface water temperature remained at just over 45-degrees despite the snow which is almost gone now. It will be by tomorrow when it is to warm to near 50. The fishing was pretty good yesterday especially the bass. People are still killing small stripers and they are also biting and also getting smaller.  The lake is clearing more and is at an excellent level and color for fishing. I had to get out my all electric weather gear to keep warm but it was fine. I was usuing the grub on the drop-offs on river channel banks and they would hit near the bottom in about 35-ft. of water. I released them all and they were fine. It would have been too deep for crappie to survive. I will fish for crappie a little later today. I did see one other boat out there and was surprised to find someone crazier than myself. It snowed out the cement repair on the pool and basketball court so I might as well go fishing. I am not much for laying on the sofa, looking out the window and saying how beautiful the snow is. Not. Especially if you have or want to work outside. They said we got about two inches of snow but it looked like more here. It did not affect the roads though and started to melt in the afternoon. It is hard to believe January is almost gone and spring is on the way. We have a lot of improvements to get done before March fishing begins in earnest which is about the middle of the month. It is sunny with a full moon and I will see if I cannot get a few crappie to bite. They need to drop the lake to about 548 but we will see.