Mike with some nice ones caught yeaterday. 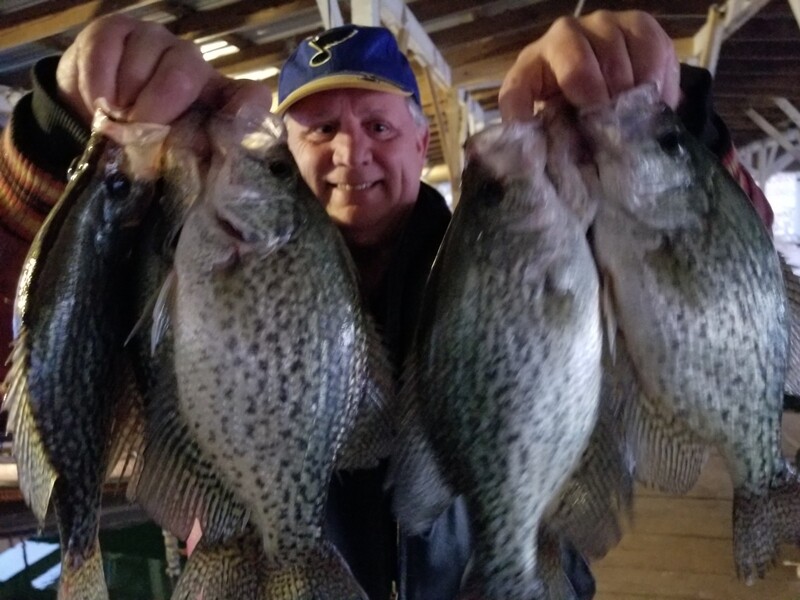 The lake level is 553.50 and is the same as this time yesterday with very little generation. It looks like they are not going to drop the lake for the winter but they still have a few weeks to wake up before spring. If you do not expect much you do not get much and we are not getting much. The lake is in excellent condition now though and is a perfect level for launching, parking and stepping right onto the dock with brush piles at just right depths.  The water is as clear as it has been in recent years and the surface water temperature is 47-48 degrees depending on how far back in the creeks and close to the bank you are. It did not drop much during the last cool streak and barring a very cold last part of January there should not be a shad kill which starts to happen when the water temperature drops below 40-degrees. The average high temperatures for the area start to rise again in just a few days. The average high now is 43 and just watch until you see a 44 and then spring is on the way. There are a lot of shad out there now. Crappie fishing has picked up a bit and bass fishing is still the best. The striper fishermen are trying hard but are not catching many and the ones that are being caught are almost all small (below 12-lbs) and a 12-15 lb. one is small compared to a couple of years ago standards. I guess they will keep killing them until they are all gone. I will keep fishing for bass, crappie, walleye, bluegill and catfish until they come back if they do. Trollers know of no other way to fish and it is hard for them to learn other methods. It seems that more other species of fish are chasing shad in the absence of big stripers and I suspect they will start catching more bass and crappie trolling and even catfish. White bass are making a little comeback  but the numbers are also not nearly as high as a few years ago. You will start seeing people with pictures of white bass instead of stripers. Hybrid Striper fishing is about the same as it has been and they have not killed off but not nearly as many of them are stocked. They put up a great fight and are fun to catch. I wish more of them were stocked. The bass population is very good here on Norfork. Smallmouth fishing has improved in the last several years and lots of them in the 4-lb. range are caught and in high numbers too. Kentucky bass are at very high numbers and some of them approach 3-lbs. I have seen more largemouth in the 5-6 pound range caught last year than in any year before and I have lived here for 26-years and fished here for more than that. Bluegill are getting bigger and bigger and catfishing has been steady for as long as I can remember. This should be a good spring for fishing. The fish are certainly there and the Game and Fish are resuming their stocking program this year and that is good. Imitation is the sincerest form of flattery but you cannot get a better grade than the person you are copying from.