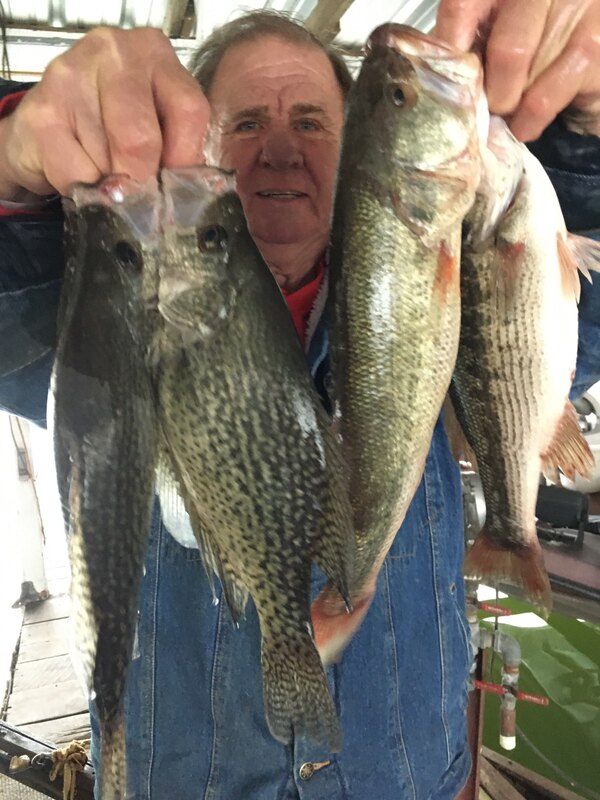 The lake level is 553.74 and has risen one inch in the last 24-hours with three hours of generation. They now have all area lakes back up to or above power pool. It looks like there is no intention to drop the lakes before the spring rains. They like to hold and hope and then close down all of the campgrounds and open flood gates and flood everything down stream in early summer. It is not the government's money but the taxpayer's but you would never know and there is no accountability. There will be no brush cutting permits from the shoreline on Norfork lake this year, only Bull Shoals. This makes sense since Norfork Lake was a WPA project to create jobs and they cleared the whole river basin of all standing wood. Bull Shoals was several years after and they finally realized this was not a good practice and left the cover in before flooding the White River. Bull Shoals inherently already has much more cover and Norfork has none that is not man made or placed there. So the government allows the public to cut brush for the fish habitats every year on Bull Shoals and every other year on Norfork. It goes right along with the dam management plan of hold and hope. If it makes sense do the opposite. The Arkansas Game and Fish are promoting fish habitat and are collecting Christmas Trees at certain locations and putting them in the lake for the fish. Now this makes sense and I am surprised the COE of Engineers does allow this. They really like control. I am glad that there is a buffer zone around the lake protecting the lake from animal confinements, herbicides, pesticides, row crops, septic systems and cutting trees for a view. This really helps to keep the water clean and I hope this never changes. There is one exception to this rule and that is Mallard Point. They allow ownership to the water there. The reason for this is that it was necessary to bribe government officials with special treatment and ability to buy this property before the Norfork River was flooded in order to get the dam approved for building. Nothing has changed in almost 80 years. It was a little cooler yesterday but was still ok with an ambient temperature in the high 40's and is still cooler today. We received a total of about 1/4 of an inch of rain yesterday afternoon about 4:Pm and last night. The rain in the afternoon was not enough to rain out the fishermen and the fishing was pretty good. I caught bass, crappie, bluegill and one short walleye. The keeper fish were released in Tom Kelly's trophy pond. The best bite was just before the rain at 4:PM and I was using the spoon and jig in brush at 25-ft. The fish are roaming and are not in one special place. The surface water temperature is still over 50 and the water is clear, especially near the shore. It is to warm back up later this weekend to about 50 and be cool until then. It is cloudy and dreary now with light wind as I head out to fish. I do not have to leave here to go on vacation and feel I am on one everyday as soon as my work is done on resort improvements. It is looking good here at Blackburns and there will be no price increases this year where your first boat stall is free. If you are in the area stop by and check us out. We are open all year.