Mike with a couple of pretty good bass caught on the Bink's Spoon and released under the dock. 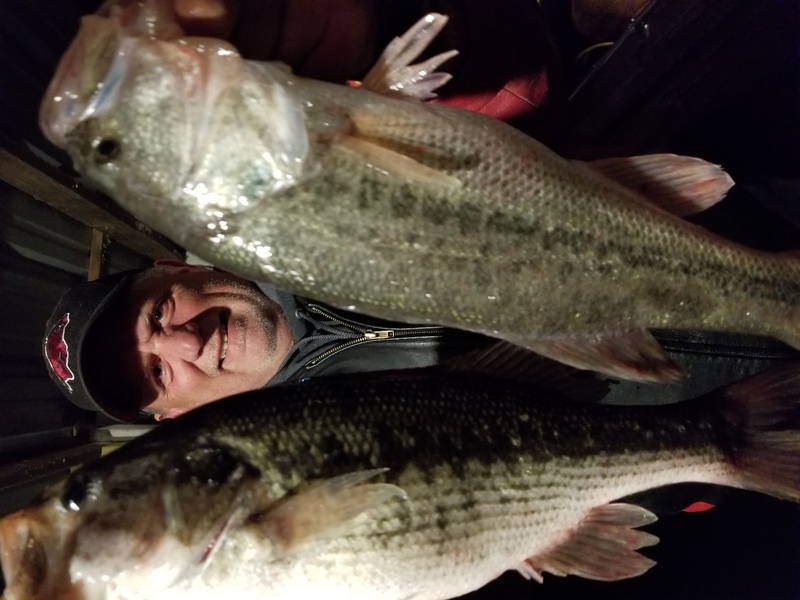 The lake level is 553.64 and has risen about 2-inches in the last 24-hours with no generation. The heavy rain south of us in the White River Basin last week is holding the river up at Newport for a bit until it works it's way out. They are holding all of the area lakes just about at the power pool level. The surface water temperature was 51 degrees with sunny skies and light wind with an ambient temperature of 55-degrees when I went out yesterday.  Bink reports he found a feeding school of temperate bass and caught all three species on his 1/2 ounce white with red throat spoon vertical jigging. They were in 40-ft. of water near the bottom. The largest fish was a sriper at 14-lbs. and is pretty big now days. He released all fish on site to let them grow. I am seeing a lot of boats near the bridges trolling but not many fish being caught there. Striper fishermen all seem to covey up there in the winter for some reason. They are really trying hard to catch fish and are fishing for a couple of days or more before finding any. I think the water temperature is still too high for the stripers to get lethargic and move to the main lake just off the channel near deep water and get lock law. I am still seeing schools on flats in 40-ft. of water on shad and moving. I am fishing for bass, crappie and bluegill on brush in 20-30 ft. of water and the bite was definitely better yesterday than the few days before. I am not catching any walleye at all now for some reason. They were just outside the brush a couple of feet off the botton but not now. I have caught one short one only this week but bass fishing is still good and crappie are improving with the bigger ones starting to show up again. This is a typical winter for fishing but the water temperature is holding up there a little longer than usual. It looks like the weather is going to deteriorate starting tonight but I have the gear to deal with it and will be out there every day. Just keep the ice away. The lake level and clarity is just right for fishing and the lake overall is in excellent condition and there are lot of fish in it.