Tom Kelly with a nice one caught and released yesterday. Tom is one good fisherman and sportsman. He caught more too. 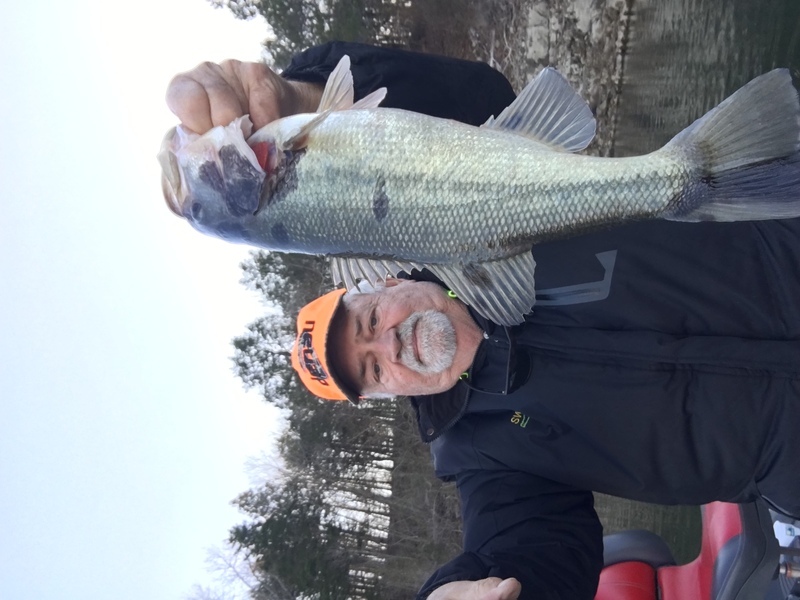 The lake level is 553.51 and is about the same as this time yesterday. They have kept the level the same for about a month and it looks like that is where they want it to be going into the spring where we are one big rain away from starting to affect parking and launching for day users and campers. Nobody seems to know why they will not draw it down. It is a good level now for fishing and we all hope it stays that way. The ambient temperature was in the 50's and there was no wind on a sunny day when I went out yesterday. The surface water temperature was just above 50 and it was about as nice of a January day as you could ask for. There were few other boats out there and the fishing was not the best for me. I caught two keeper bass and one nice crappie in two hours of fishing. The overall fishing has been slow for a few days but some good ones are still being caught. Mostly bass and crappie but a few trollers are catching some stripers in the 6-9 lb. range and hybrids about 6-lbs. but not very many. They are still killing what is left of the big stripers and soon they will be bragging about catching 6-8 pounders instead of 30-pounders of a few years ago. Some are already doing this. I guess meat hunting is more important than sport fishing. At least the stocking program is to resume this year and that is good since the stripers and hybrids are semi-put and take and do not reproduce in the lake. Hopefully we do not have another striper kill in late summer this year. Some schools of white bass are showing up in the 1-1/2 lb. range and that is good as they were also scarce for the last couple of years. They reproduce and grow fast in Norfork, are easily caught and fun to catch. They are the go to fish when others are not biting and we need them. Nobody seems to know why they died off but they are coming back. Hybrid fishing has been about normal but will hurt a bit with none being stocked this year. Other species in Norfork are high in numbers and size and are very healthy. It looks to be a very good spring for fishing on Norfork so far. The many walleye that were just short this year should be legal this spring and the bass are doing very well with many people practicing catch and release. I have seen more five and six pound bass caught this year than I have seen in many years of fishing Norfork. Smallmouth fishing has also been excellent. The shad population is about right so everything should have enough feed unless we have a big shad kill and it does not look like that so far with water temperatures near 50 in January. Anything could happen but things look good so far and I am enjoying winter fishing every day. Kentucky Bass population numbers and size are also good and they make excellent eating and that is what they are there for. Same for bluegill.