Tom Kelly with a couple of nice bass released under the dock. 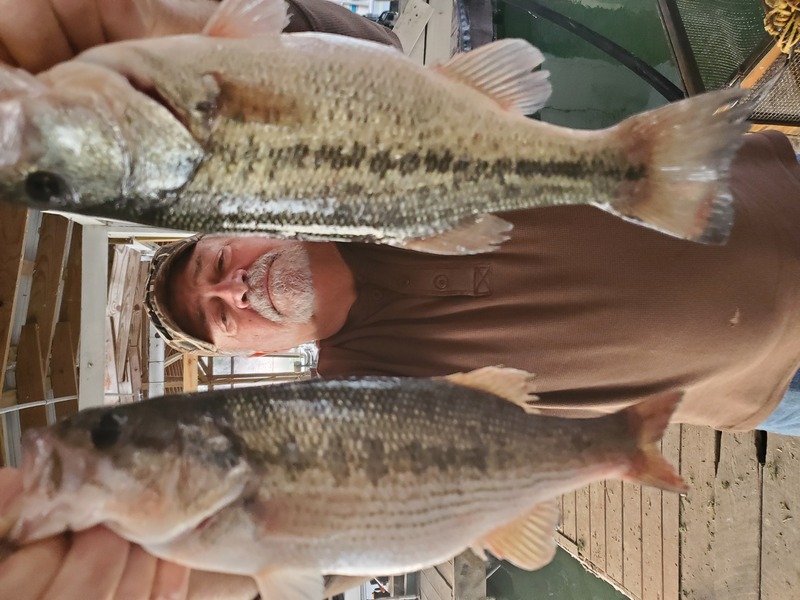 The lake level is 553.52 and has dropped one inch in the last 24-hours with about 4-hours of generation. We are to get three inches of rain Wednesday and Thursday and it would have been nice if the lake was lower before this. They have had weeks to do so but refuse. The surface water temperature is just about 50 degrees and has dropped slowly. The weather was nice yesterday with little wind and all people caught fish. Everybody released their fish under the dock and none were killed. There are a lot of them under the dock now. The water is still stained a little but not bad. Good for fishing. Bass, crappie, bluegill, white bass and a small striper about 9-lbs were caught.  They were mostly on or just outside brush at 20-40 ft. and hitting the spoon but some nice bass were caught on the grub near the bottom in 30-feet. It was nice to have light wind and calm waters.The days are getting longer now and that is good. We are getting a lot of work and improvements done around Blackburns getting ready for spring. You cannot wait for it to warm up as it gets very busy here in March. We will see what heavy rain does to fishing but it is dry and should not raise the lake much unless we get a lot in the watershead north of us and they completey shut off generation like they usually do when it rains. It should be ok but if we were at 548 and it raised 5-feet we would be where we are now after the rain instead of 558. They like to keep us one big rain away from causing trouble. It must be fun for them. Otherwise they would not have to do it. The lake right now is in excellent condition for fishing.