Two of several caught yesterday and released under the dock. 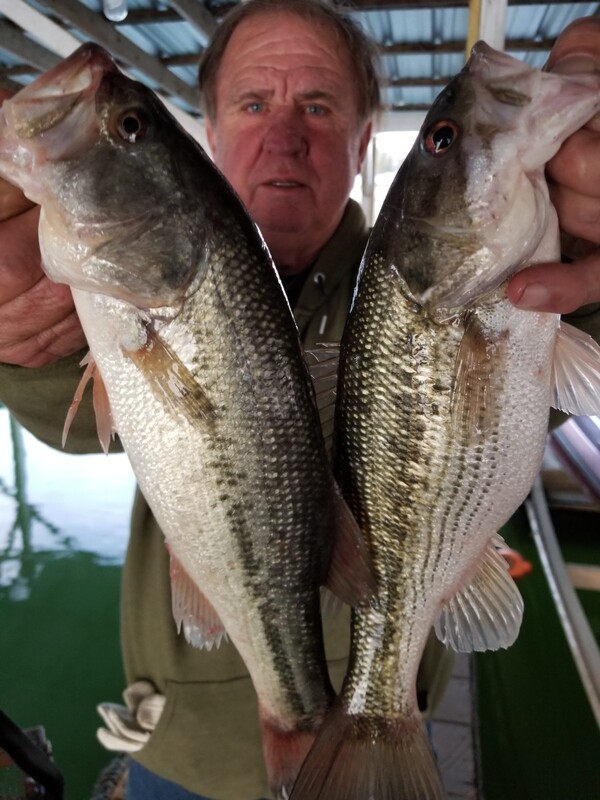 The lake level is 553.51 and has risen a little less than an inch in the last 24-hours with about two hours of generation. The new news is that they have dropped the White River at Newport to 3+ feet and they can barely launch a river boat there. It looks like they will run the river completey dry before they drop the area lakes for the winter. They are determined to keep them up as high as possible for as long as possible in order to make them flood next spring and early summer. This is worse than incompetence. The ambient temperature was in the low 60's, surface water temperature 53+, visibility was about 5-feet and the wind was from the south at about 10-15 MPH when I went out yesterday and the fish were biting. I saw no other boats on the lake. I was catching bass, bluegill and crappie fast and then the wind shifted to the northwest, increased in velocity with big white caps and it got black in the west. It took just a few minutes for the storm to blow through with some heavy rain and then the sun came out. The temperature dropped about 20-degrees and the fish stopped biting. I mean completely stopped. I ducked into an empty dock stall until it was over, fished about thirty minutes until sunset and then came in. I ended up catching about 10 crappy and a half dozen bass and a couple of very large bluegill. Still no walleye. It is to get very cold tonight  and cool tomorrow and then warm again the day after Christmas. This cold weather should really help the bass fishing but the moon getting bigger and will be full on the 29th and the high pressure just getting here might not help things. One thing you can be sure of is the cold fronts do not help anything but fishing gets better and better until the next ones gets here. Cloudy days with a light south wind, no moon and the lake rising slowly are my favorite. The days are getting longer finally. The lake overall is in excellent condition. I am not seeing as many schools of shad as I was.