Caught and released under the dock yesterday. This was the biggest. 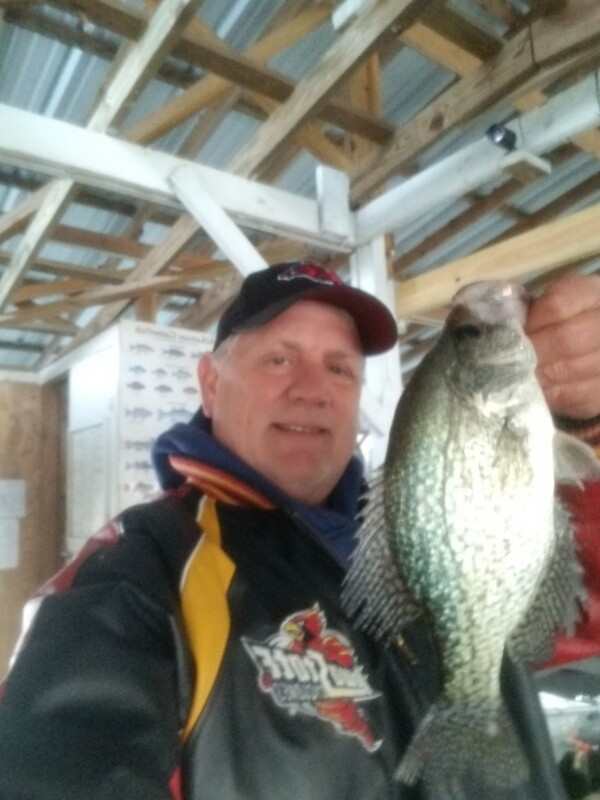 The lake level is 553.48 and is stable with no generation for almost 24-hours. It has been in the 553's for a month and it looks like that is where they are going to keep it and not draw it down again this winter. Maybe it will change if they need electricity in the Southwestern Power area and it does not rain much but it seems that they want the water level high going into the spring if they possibly can and blame high water on the rain which everybody knows will come except for the Corps. Their motto it still hold and hope and then open the gates. The surface water temperature is still almost 53 degrees and has only dropped 10 degrees in the last month and has dropped very slowly but steadily. It is now at winter bassin temperature and there were several boats out there yesterday taking advantage of the mild temperatures and no wind. Several people caught fish and everyone here at Blackburns caught several. The people still fishing for stripers in deep water also caught some fish on live bait in the 8-10 lb. range and seemed proud to do so. I guess they will be happy when they are all gone but I will not be. It has not been that long ago when a few 40-pound stripers were caught and a 30-pounder was common and now they are killing and taking pictures of fish less than 10-lbs. It is not impressive. You cannot pretend that bringing up fish that are 50-60 down will survive. Just do not fish for deep fish until they come back. There will be plenty of top-water fishing in a few months and they can be released. Learn how to catch other fish until then.  I Iike the fact that Norfork has so many different varieties of fish and brings in fishermen from all over with different wants. When one species is not biting very well you can catch others. That is a good attraction for the area.  20-years ago it was hard to catch a good walleye and now they are common and the numbers are on the rise. It was about in 1998 when diving was much more popular than it is now on Norfork that there was a year-long fishing tournament at the dive shop. Only one keeper walleye was speared that whole season. Now with the reduced visibility due to the high water and dive shops closing due to low numbers of divers, the ones left on Norfork are doing much better now with the increased fish population and would come back if the visibility came back. We need several normal water level years and the resumption of fish stockings to bring back the striper fishermen and scuba divers and the elimination of Covid to bring back the people in general.  The overall fishing on Norfork is just fair-good and bass fishing is the best with crappie and bluegill next. Some red meat fish are being caught but they are trolling miles to find them with Hybrids about as big as the stripers. I am glad we have them. I have not caught a keeper walleye in a week and am out there every day.