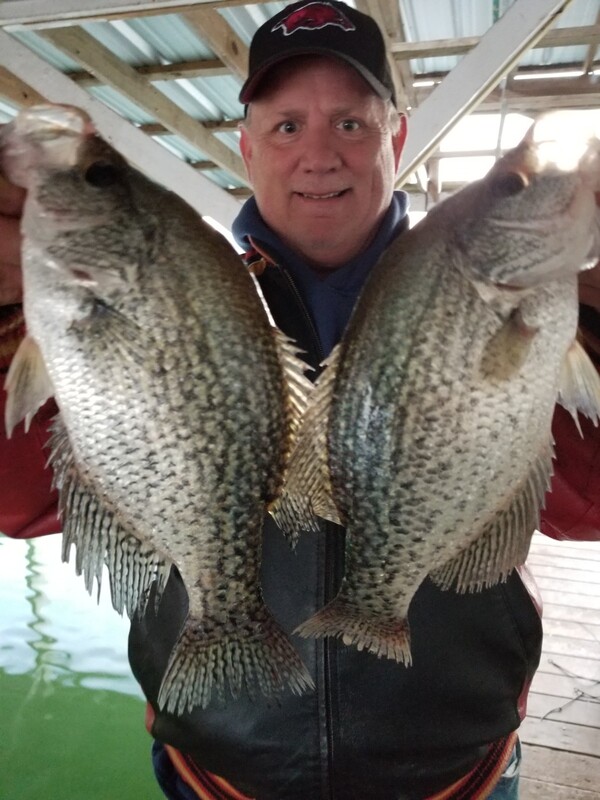 The lake level is 553.42 and is the same as yesterday with very little generation. All of the area lakes are either stable or rising slowly except Table rock which is dropping so they can protect Branson Landing from flooding next spring. The surface temperature was exactly 54 and the lake looked stained but you could see your lure down about five feet when I went out yesterday. It was sunny with light winds and a very nice day. I saw four boats out there and three were from blackburns. Fishing was slow but everyone caught fish. Mostly crappie. They were in 30-ft. of water on brush. The sides of their mouth are paper thin and you have to bring them in very slowly and use the net. I use true turn or Mr. Crappie hooks to try and catch them in the upper jaw but it does not always work. I like the #4 red ones. Jig heads are usually straight hooks and there is not much you can do about where you catch them. We are catching mostly black nosed crappie for some reason now and were catching the big white ones. Most of the black nosed ones are stocked which shows how important the stocking program is. I sure hope it gets back to normal next year after the covid vaccine gets to everybody. Bass are not stocked and seem to have a good population with several big ones. We are getting more and more 4-lb.smallmouth and several people are now releasing them. Releasing big fish is better than stocking little ones. More and more people are realizing the low numbers of big stripers and are starting to release the ones they are catching instead of taking pictures of dock floors full of dead small ones and bragging about them. This is good and should help the numbers and size to improve in the next few years if they do not let the water level get too high and hold it there all summer and the stocking program resumes and increases. Until then I will keep no red meat fish and not fish for them in deep water. Venting them does not work. They will go down after doing so but die anyway. Crappie are another species that cannot take coming out of deep water either. 20-ft. is about the max for them. I quit fishing for them in deep water after I have caught all that I want to keep and that is not very many. We have a good population of big crappie in Norfork and I want it to stay that way. I caught no picture fish yesterday but Mike did.