Caught on the Bink's spoon and released under my dock. Caught some crappie and bluegill also but not high numbers. 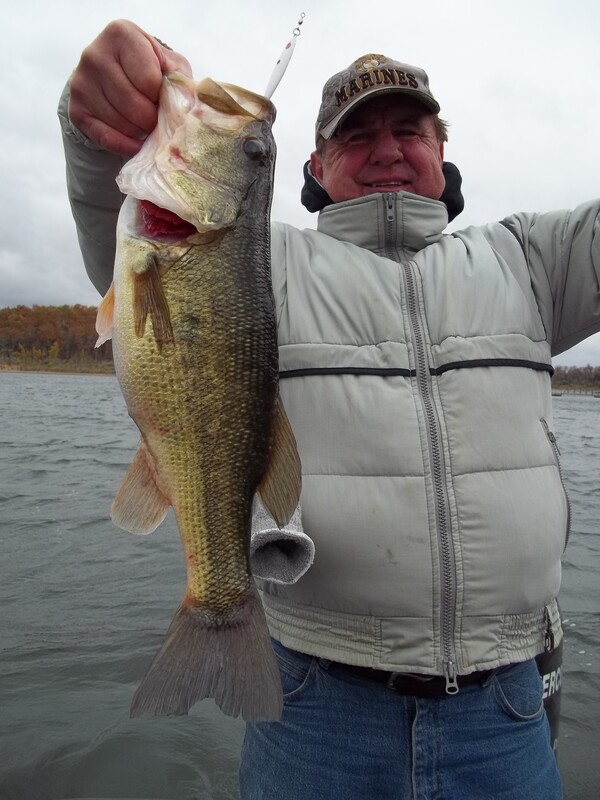 The lake level is 553.54 and has dropped about one inch in the last 24-hours with two generators running for about six hours. The White River at Newport is now a little less than eight feet and was below seven. The surface water temperature was 55 even when i went out yesterday and I saw no other boats all the time I was out. It was cool but very little wind and I spooned two different brush piles and caught bass, crappie and bluegill. The cool weather will not raise the water temperature any time soon but it is to get near 60 next week.  The fish were all in about 20-feet of water and right on top of the brush. I did not catch high numbers but some very nice fish. Our striper fishermen went home and caught a few hybrids and small white bass but were disappointed. They fished hard and were very determined. I was sorry for them but I do not know if they will come back or not. I showed them what I was catching but that is not what they wanted. The stripers that they did catch were about 5-pounds. The hybrids were just a little bigger. I am catching some bass that big. The Game and Fish are reporting that some fish are getting a fungal disease or water molds on Norfork. I am fishing and catching fish everyday and have not seen any. I have in the past though. The ones that I am catching are very healthy and fat. I think it has something to do with how they are handled after catching and releasing but am not sure. The tagged one that I caught last week was very healthy and had obviously been caught or netted before. It is cold with the high to barely reach 40 but it will be ok if the wind does not blow. The lake in general is in excellent condition and fishing overall is just fair but some nice ones are coming in every day. One bluegill that I caught yesterday was very large and fun to catch. Sandwich size. I turned the bass and crappie loose under the dock. The catfish are still biting and that really surprises me. They are usually in open water by now especially the flatheads.