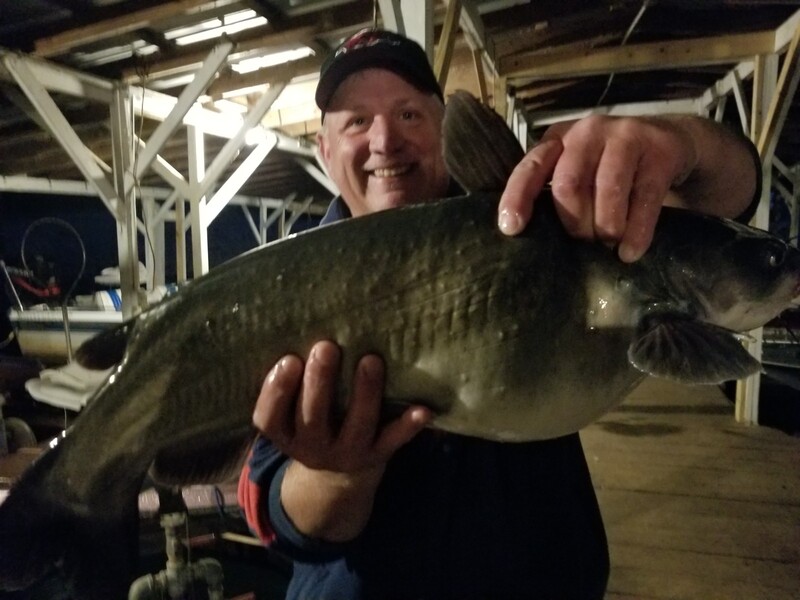 The lake level is 553.41 and has raised 1-3/4 inches in the last 24-hours with absolutely no generation. The White River at Newport is now at 8.5 feet and dropping. It is unbelievable that they would dry up the river and not let any water out. This is an example of how badly the dams are managed. We did receive about 0.65 inches of rain yesterday. It is cloudy and much cooler today with a high in the 40's. The lake surface temperature was 56 when I went out yesterday and is about the same today and you could see your lure down about 5-feet.  The fishing continues to be just fair overall but some nice fish are coming in every day. Bass, crappie, bluegill are still the best bite with catfish, walleye, hybrid stripers and a few very small white bass also being caught. Our striper fishermen fished all morning and most of the rainy afternoon to catch one hybrid striper and no stripers. We are scheduled to get mixed precipitation late tonight and early tomorrow morning and then clear up again. I will believe it when I see it but they could be right, but not often.  They were right yesterday but the timing was off. I guess it is time to get out the cold weather gear but not having to until the middle of December is not bad. I fished brush in 30-35 feet of water and caught bluegill and crappie and then switched to the grub on a river channel bank next to deep water and caught several bass but no picture fish earlier today. Mike caught a nice catfish off the dock after the rain at dark. I have commercial fished for catfish on several rivers and also on lakes and have never seen a channel much bigger than this. A 10-lb is a big one and this one is larger than that. Much larger. You cannot predict what you can catch on Norfork but we have about everything except muskies and northerns. I like that. I also like that you cannot drill holes in our water or walk on it and there is no closed season.