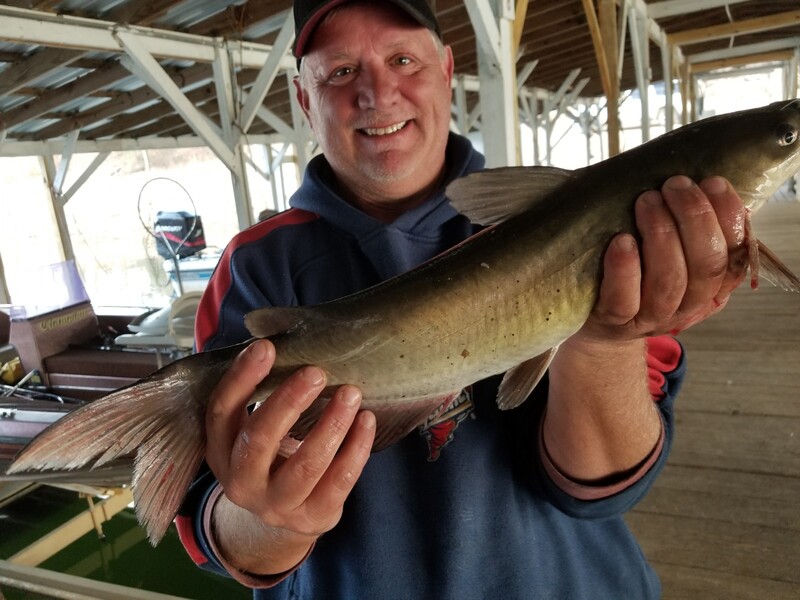 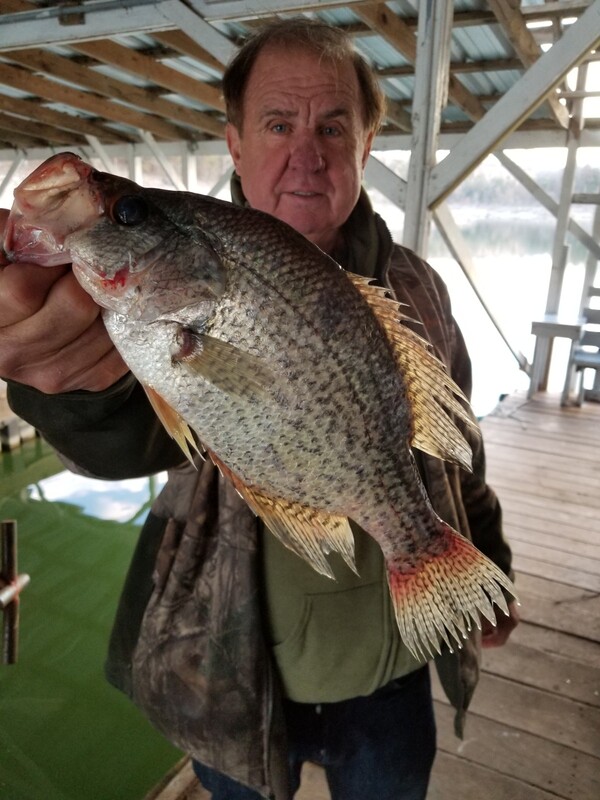 The lake level is 553.20 and is about the same as yesterday with only about two hours of generation. Maybe they will let a little out after they get Table Rock down to below normal to protect the Branson Landing at all costs. It is not about any rules just the $.  We are not to get any rain until Friday with very warm temperature in the 60's starting tomorrow. It was very nice out yesterday with a high of near 50 and light winds and the fish were biting. We caught catfish, bass, crappie and bluegill and a few open water fish not worthy of a picture. The White Bass were small and the hybrids were about 4-5 pounds with no stripers. They were released to grow but we kept the catfish and a couple of crappie for a neighbor. It is very foggy this morning but should give way to sunny skies soon. The lake surface temperature is about 56 and has been stable or dropping just a bit for several weeks. The lake tries to clear but then stains up some but also has been about the same and you can see your lure down about 3-4 feet. It was more clear a little over a month ago but is still very good for fishing and the lake in general is in excellent condition. The open water fish are hard to find with people fishing two or three days and catching nothing and then finding a school and have some fast fishing for a few minutes and then they are gone again. There are lots of schools of shad with nothing chasing them. The water temperature has not dropped enough for the winter bass to stay on the bank yet but several are still there early and late feeding.  The meteorological winter started December 1st and ends March 1st and that is about what the actual winter is here but sometimes lasts until March 15th. We tell people the spring bite starts March 15th here because the weather is variable the first of March and cold fronts can destroy the fishing for a few days at a time but the night bite for stripers is almost always five days before the full moon in March when they go to the bank to simulate a spawn. We will see what happens this year with the diminished numbers of large stripers.  Top water bite starts sometime in April but can also be variable and lasts through May.The walleye bite is the best in May and early June after their spawn in February. For some reason not nearly as many walleye take a run up the river to spawn as several years ago but the total number of fish has grown despite this and must be due to stockings. Missouri usually stocks more walleye than Arkansas and we benefit from this. More and more walleye fishermen are coming to Norfork than before replacing the striper fishermen. Stripers have been stocked in Norfork for many years and even though they do not reproduce it will be very hard to catch all of them but people that kill the small ones of 10-lbs. or less are trying hard to do this. Bass fishing is getting better and better and Norfork is getting to be a very good smallmouth fishery with many fish caught in the 4-lb. range. With the large variety of fish in Norfork it is hard to tell what you will catch and that is part of the fun.