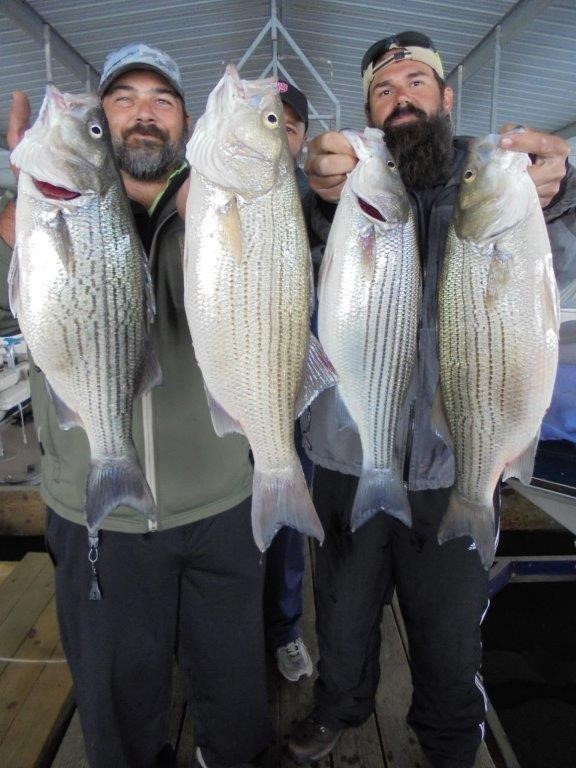 The lake level is 569.03 and has dropped 1-inch in the last 24-hours. The discharge rate is the same and they are still holding the White River at Newport at 21 feet. They are to drop it to 18 feet May 1st. If they do that they are not just incompetent but idiots. They enjoy keeping the lakes very high and just one big rain away from opening up the spillway gates and flooding out everything below. They would rather do that when the crops are planted and up rather than in the fall and winter. As long as Branson is protected, everything is fine. The level is not affecting fishing but has limited access for day users. I was amazed how clear the lake was when I went out yesterday. I believe the creeks are clearer than the main lake. The surface water temperature was just over 60 and there were several boats out despite the wind. It was hard to get out of the wind with it coming from the north west and swirling. I used both the grub and minnow and the Bobby Garland blue ice jig. Both caught fish. The crappie were spawned out females with one about 16-inches and the bass were mostly 13-inch Kentuckies. I was casting part way back in the creeks behind the brush piles and letting the lure sink into the brush. They mostly hit about 8-12 feet down over 25-30 feet of water. I caught seven crappie and four bass and came back in. It is to rain some for the next several days but should not rain us out very long. Flatheads are still biting on throw lines baited with perch and there was a good top water bite for red meat fish just after 7:AM. Limb lines are not producing very well as it is hard to keep the turtles off them. You have to bait up in the dark and run them often to get fish.  I am really sorry they are not stocking stripers and hybrids this year but the safety of the AGFC is more important. It just had to happen just when the numbers of big fish are down and they were needed to get the population back up for the future. The big White Bass population is also down. Bass and crappie population is not. Walleye is just about the same. Good fish are being caught everyday.