Bryan Deardoff with some good ones. He kept a few and released the rest.  Some were deep hooked. 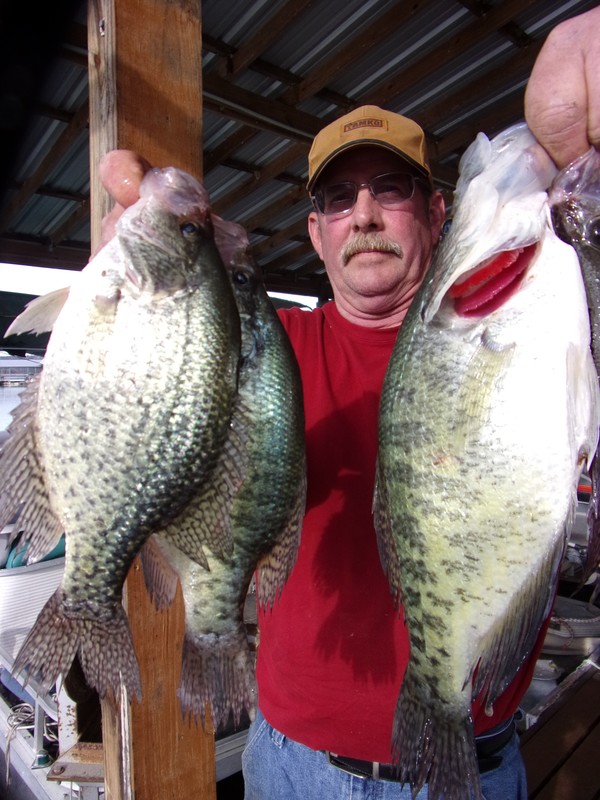 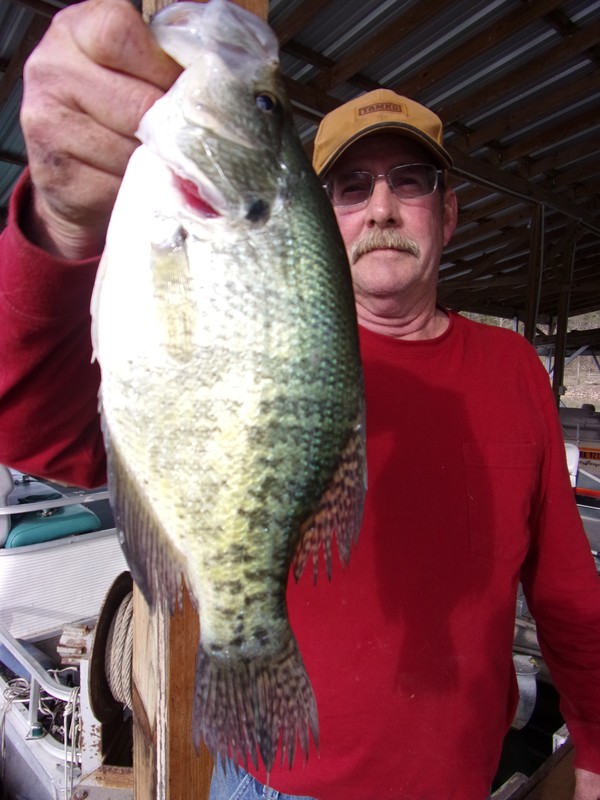 The lake level is 565.29 and has risen 1-ft. in the last 24-hours with very limited generation. One generator running less than 1/2 the time. The water surface temperature is in the mid 50's depending where you are. The rapid level rise from rainfall from Missouri Thursday caused the creeks and main lake channels to turn brown but did not hurt the fishing. Any debris is small.  Bass were surfacing chasing shad last evening in Blackburns Creek but most fish were near the bank in the buckbrush and being caught on spinner baits and jerk baits. Some fish are way back in the creeks in the warmer water. The female crappie are still pre-spawn feeding on brush and the males have moved up into the shallow water in the creeks. I am catching all females  (big ones too) and they are full of eggs with blood lines and just waiting for some heat to go to the beds. I am releasing dozens of them under our dock after pictures. I bet they will move to crappie rock brush after they spawn.  Remember when you fish the banks that all of the males will be guarding the nests after the spawn and if you catch them off, the bluegill eat the eggs faster than you can kiss a duck. Turn some back. It has been a long winter but not very cold but has been slow warming up. It snowed once and did not cover the ground. I like that. Winter fishing has been very good this year and I have caught some very large fish. I would really like it if the striper fishermen would quit killing all of these small fish. People now think a 15-lb. striper is big where just a few years ago a 30-lb one was big. People taking pictures of dock floors full of dead small stripers are not impressing anybody. I have released all stripers and hybrids for over two years and do not fish for them where they are too deep to survive. Venting does not work. They can go down for a while but die anyway. They need to lower the limit to a combination of two stripers and hybrids from three and stop culling. They do not dress out very well anyway after the red meat is cut out. It is rainy and cold now but I will go out and let you know what is happening. It is very busy here and I have a lot of work to do.  All of the cabins are open now except one and they are working on it. Come on down and practice social distancing. We will not charge you too much and your first boat stall is free. There is $1.64 gas just up the road near the Dollar General. The girls are disinfecting all cabins after each use and Baxter County still has not had any positive cases that I am aware of. I cannot think of a better place to be than Blackburns Resort. You can save at least $25/day to stay at the best place. Now than Cardinal baseball is not on I am forced to fish more.