Mike Eakle with the fish of the day. It was also released. One nice crappie but not very many. 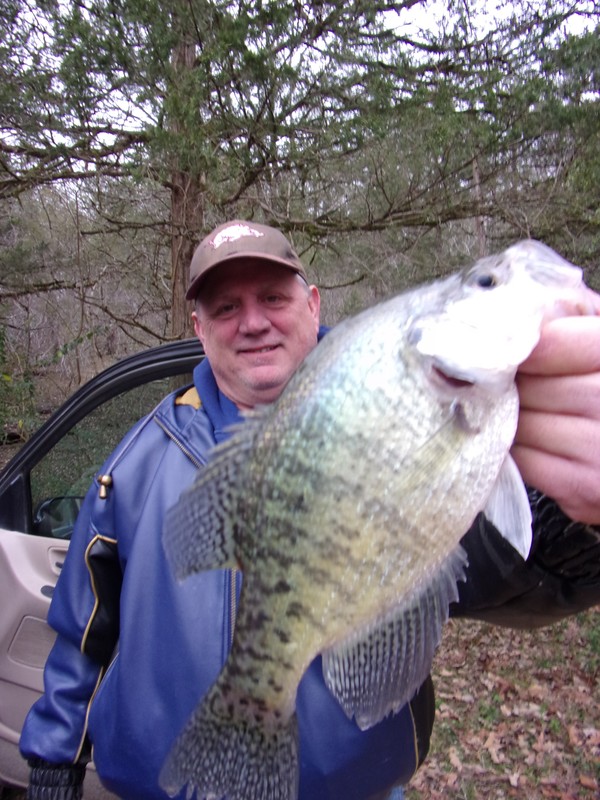 The lake level is 554.85 and has dropped 4-1/2 inches in the last 24-hours with both generators running and five spillway gates open one foot. It is equal to about three generators. There is no reason to stop this as the White River at Newport is only 19-feet so far. With the storm on Thursday we went from 82 degrees ambient in the afternoon to 50 yesterday afternoon and a little cooler than that today. We received about one inch of a mixture of rain and hail in the rain gauge thursday and another 0.8 inches as of this morning of just rain. It is raining now with more to come. At least they did not quit generating like they usually do when the spring rains begin. I just hope they do not just take it down to 553.75, which is the power pool, where the Corps of Engineers cede the power to the electric company. They need to keep going down to 548 to make room for the spring rains. The lake is in excellent condition now for fishing and boating. The cold front slowed fishing yesterday but some good ones were still caught but not very many. All worked hard for what they caught. The numbers were way down. It was cloudy and misting rain most of the afternoon but not bad enough to bring people in. The water surface temperature dropped to 52 on the main lake and 53+ back in the creeks. The ice cubes had something to do with it. It is the third time I have seen hail here in 25-years and was the largest and lasted the longest. It did not seem to hurt anything here though. I heard it did in Missouri. This will put back the threadfin shad spawn some and the top-water bite with the cool weather seceduled until next week. Nobody that I know of are catching stripers at night yet but it will happen. There just are not that many big stripers. If people keep killing 6-12 lb. ones there will not be any left at all. The hybrid population seems to be about normal though but not that many are stocked. The stripers and hybrids do not reproduce in our lakes and are what we call semi-put and take.  Most of us here at Blackburns are releasing all hybrids and stripers on site but there is no rule to make us do so.  I would like the limit to be reduced to two per day and four possession limit imposed until the numbers come back. They are fun to catch. It looks to be a sit out on the porch and rig poles and arrange the tackle box kind of day but I will be out there if the rain slows.  I do not have far to go and can duck back in the dock quickly.  These cold fronts turn fishing off as much as anything I know of but this too shall pass. I am happy just to be able to be out there.