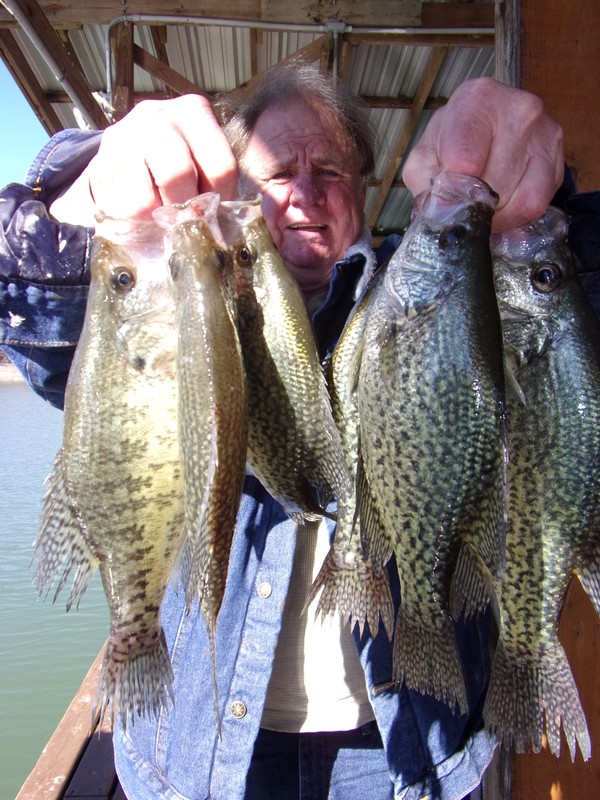 The lake level is 556 with both generators still running continuously and five spillway gates open one foot. This is almost like three generators. It dropped 5-1/2 inches in the last 24-hours. It rained a little early this morning but not much. Rain is predicted for the next 2-3 days. I had a 53+ degree water temperature in Blackburns creek when I went out yesterday and just under that on the main lake. It was crappie fishing day with bass fishing tomorrow. I like both the same. The lake level is perfect for fishing and boating now and the water is still stained but clearing. it is clearest near the shore. Blackburns brush piles are at a very good depth now too. The 1/2 ounce Bink's Many Shad is now my favorite lure. Fish after fish were caught on it on brush at 30-ft. I can only hold up six without hurting them and putting fingers in the gills. The ones in the picture  and several more were released under Blackburns dock. They all swam right into the school but I am not sure if they will stay there. They are down there somewhere. Lots of fish are under the dock but the small bluegill have not moved in yet.  When this happens the catfish will start biting and the bass will make a nest. I do not bed fish. It is getting near spawn time and this is the best time to release. A few of the fish were white crappie and very large. Other people caught some nice bass so I know right where to go today to get pre-soawn bass. They are on the same places every year. It is good to have fishing pick up again. Early March is a challenge so you have to go out everyday and work for them.. That is fun too. I like to catch fish when nobody else does but most people are catching some now.  Trollers are catching some fish but are burning a lot of gas.