Bink caught this one on his spoon yesterday. 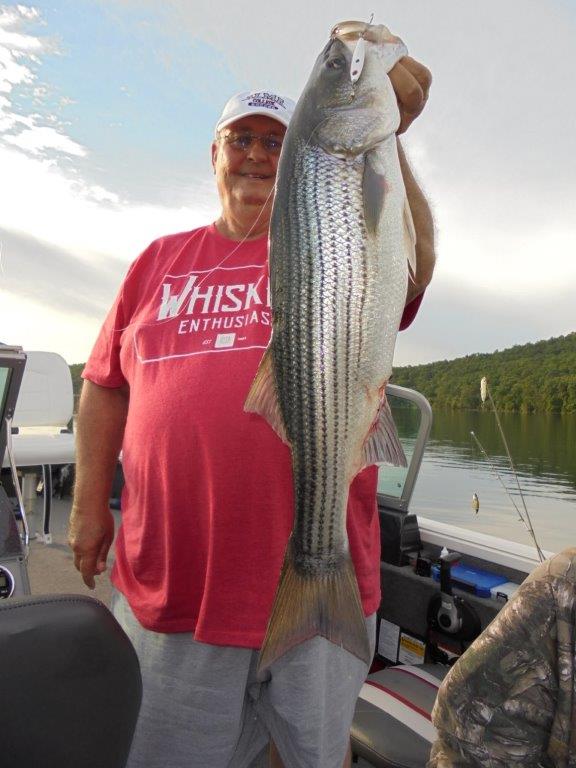 The lake level is 572.70 and has dropped over 3-inches in the last 24-hours. The Mississippi is dropping, the Missouri is dropping and the Yakima river in Washington state is dropping. I guess it is ok to drop the huge and mighty Norfork lake now. We must keep the level at Newport at 12-feet but nobody knows why when the minor flood stage there on the White River is 26-feet. Did anyone notice they always stop generating during the trout festival no matter what? We must take care of the put and take trout. The lake traffic continued to be heavy (Norfork standards not Lake of the Ozark standards) until yesterday evening. The ramps were very busy and trailers were parked all the way out to the highway. Day users really wanted to get out there bad. It had to be really good for the Mountain Home economy and local businesses. I know Blackburns has 11 pontoon boats and almost all of them were rented. Having all of the beaches and swim areas under water limits the swimming to mostly off boats and off docks and in resort swimming pools. The lake remains in good condition despite the water level with just a small amount of debris floating. It is going away as the lake drops and is less in the creeks than the main lake. The level is about 1.3 feet lower than it's high of 574. Fishing is pretty good early for top water bass and later near the bank on plastic worms. Red meat fish are in their normal places for the year but not quite as deep.I am still seeing pictures of dock floors full of dead small stripers and the striper fishermen will pay the price for this in the future. It is not impressive to see how many you can kill. All of them coming out of deep water will die. Catch a few, leave a few. The limit needs to be dropped to two.