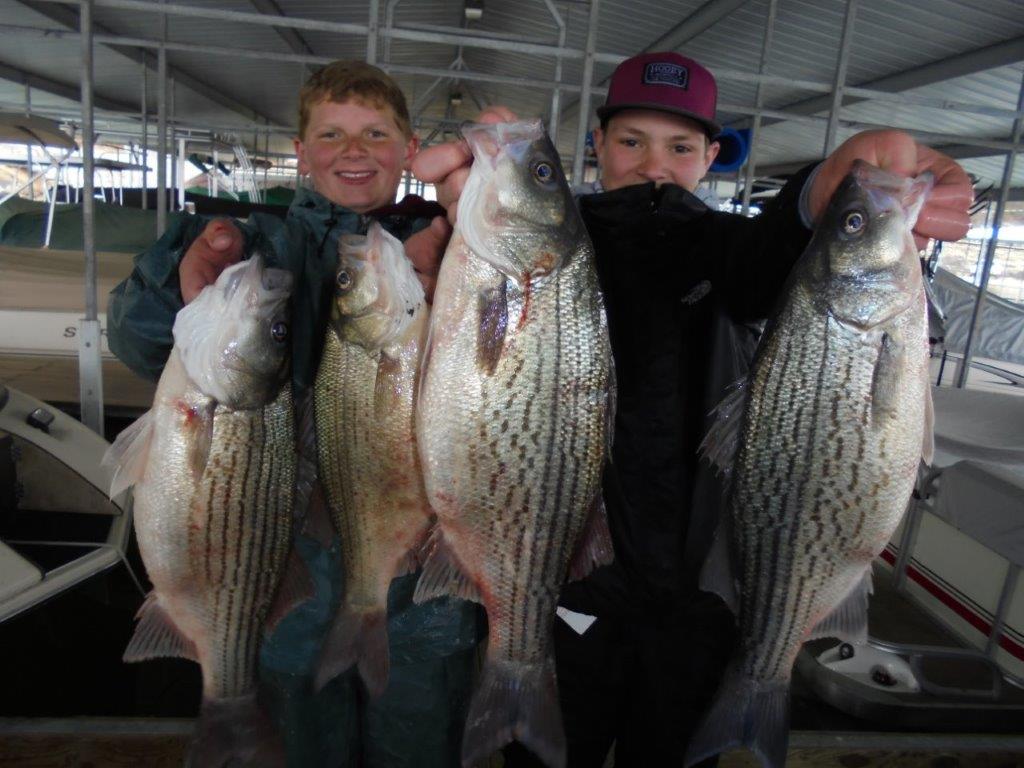 The lake level is 556.48 and has dropped a little over 7-inches in the last 24-hours with both generators running and 8-spillway gates open 1-foot. If they keep this up it will drop faster as the bowl gets smaller. I would like it to be at what I have called normal for 25-years which is 552 before they started messing with the numbers. We are in pretty good shape now going into the rainy season. Both the main lake and the creeks are stained but are a good color for fishing. The surface water temperature is still in the high 40's on the main lake but higher in the backs of shallow creeks. Our normal ambient high is 60-degrees and it has been slow warming up this year with highs getting into the low 70's one day and the high 40's the next but that is not unusual for early March.  Things get better after march 15th. We need some warmer overnight lows to bring the fish to the bank but some are already there but mostly smaller ones. Blackburns brush piles are coming back into play now after some of them were too deep with the water level but not holding a lot of fish. You can fish three or four and get one or two crappie or bass off each one right in the brush in 30-feet. Crappie fishing now is by no means good but you can catch some if you work at it. The male crappie will move into the creeks shallow on any structure in a couple of weeks to make a nest and then the females will spawn and then move to brush holding baitfish. The fish feed heavily during the staging period when the water is in the mid-50's.  It is important to not catch all the males off the banks early. The largest fish spawn first and then can be caught off brush first. As the season goes on and the water warms the large fish on brush will get dilluted with the smaller fish joining them. The temperate bass are biting pretty good now with most being white bass and hybrids. The best lure right now is the 1/2 ounce jigging spoon for bass and 1/4 ounce for crappie. I cut a barb off the treble hook on the spoon when fishing right in brush to keep from losing the spoon. The slip float and minnow or the grub and minnow are not working well right now but the stingray grub is starting to produce back in the creeks on points working it slowly off the bottom for bass. We just finished completey remodeling Cabin #11 which is the three bedroom two bath house with big screened-in porch and it looks great. You will like it when you get here and we did not raise the price. Now all cabins have new roofs and laminate floors. Check our prices before you book and pay too much elsewhere. Blackburns is the best value in the Ozarks. Some dock work is next and them we will be ready.