One of several caught fishing with Bink yesterday. 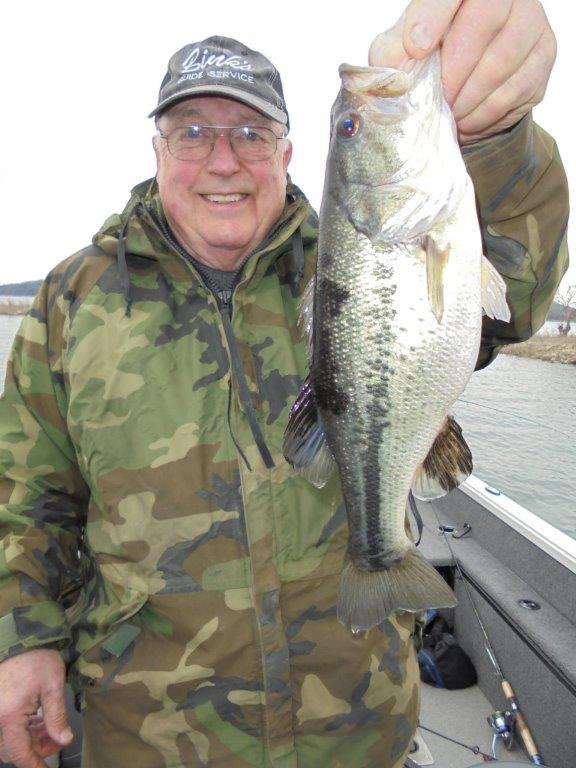 The lake level is 557.56 and has dropped a little over two inches in the last 24-hours.  They closed the spillway gates and slowed the drop down drastically but still left the two generators running. It was dropping 8-inches in a 24-hour period but that is old news. It showed what they can do if they want to. It has dropped 6.5 feet since the high. The water clarity is gone here in the middle of the lake where both the main lake and creeks are stained.  There must have been some areas of locally heavy rainfall in the watershed area in Missouri last week. We did not get very much here and the creeks did not run. Fishing has picked up a bit and it was good to see fish caught that were not white bass or hybrids. They are still between Mallard point and Cranfield in front of the docks in water between 25-40 feet deep at varied depths outside brush piles and are hitting spoons. You can go several hours with no bites and then they start.  That is the same with the crappie and bass.  When they bite it does not last long and I am catching most of my fish starting at sundown. It was very windy for a couple of days and the white caps were big especially saturday. It was calm yesterday afternoon and the fishing was better in the morning than evening. Most of the fish that I caught were small but Bink caught some good ones. I wish people would quit killing all of those small stripers.  Ten or twelve pounders are not big but will be if the fishing pressure keeps increasing. The limit needs to be dropped to two/day.  Keep the white bass. Dock floors full of dead small stripers are not impressive. The surface temperature is in the high 40's and rising quickly in the shallower creeks. Many fish of all species are still in open water on shad and are getting shallower.