One happy young fellow fishing with Bink.  We like it when they put down their phone and pick up a pole. 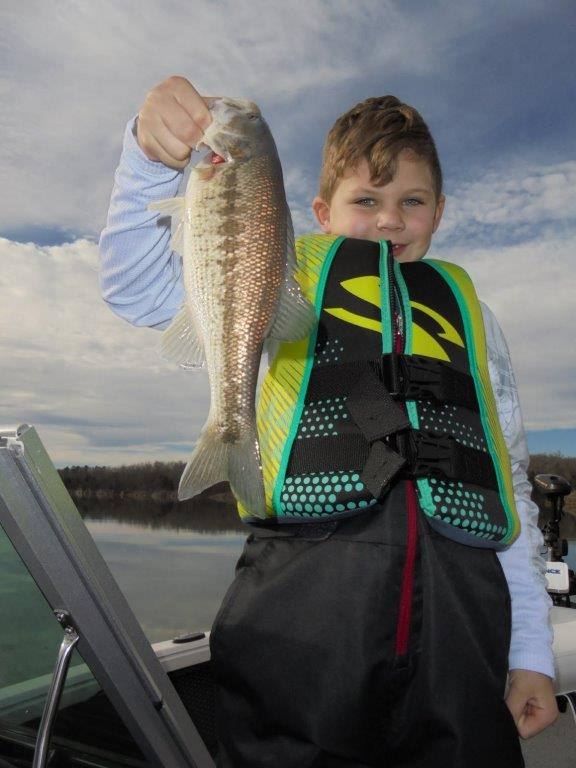 It was warm with light wind when I went out yesterday. Fishing is changing almost daily with fronts moving through often. You can not fish for several days, go out once and write an accurate report. One day you can find open water fish feeding and the next nothing. Most of them are just white bass anyway.  Crappie fishing has slowed a bit so I went after bass. The surface temperature was just under 50 on the main lake and the clarity was not affected much by the rain. Most of the debris was gone somewhere with the wind changing direction often.  The lake level is 556.37 and rising just a bit with at least one generator running most of the time. I spooned brush for quite a while with only a few small fish and then at sunset switched to the grub. The fish started biting and continued until dark with the fish getting bigger the later it got.  I ended up with 4-keeper bass and several smaller ones. All were released at the boat. I did see a few other boats out there but not many for such a beautiful day. Blackburns brush piles are getting well used but not all of them. The moochers have not found all of the new ones yet. The ones put in by the game and fish are excellent and were badly needed. I am not seeing as many shad as normal but that does not mean they are not there. Just not where I am fishing. I do not fish where there are too many shad anyway.