James Soltysiak with a nice walleye caught this morning.

Tom Kelly with one of several caught and released yesterday. 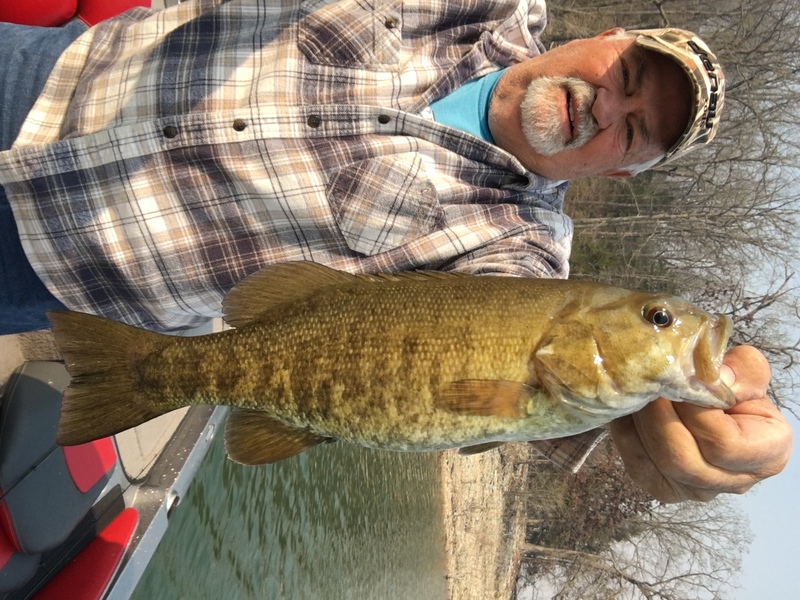 The lake level is 559.88 and has dropped three inches in the last 24-hours with both generators running continuously.They are holding the White River at Newport at just below 23-feet and that is good. It is nice to be below 560 again and I hope they continue the good work albeit a little slow and late. The rain threat for wednesday is 40% and we can take some with no problem as dry as it is. Before that and after, it is to be mostly sunny and dry with highs in the 70's. If they continue until April 15th when the rules change it will be good. Fishing was much better this morning than yesterday afternoon and the water is warming a bit and is still in the mid 50's on main lake. It is all over the place back in the creeks but they are both clearing and are clearest near the bank. Bass, crappie, walleye, white bass and a hybrid striper were all caught with Tom Kelly catching several nice smallmouth in Panther creek. All of his fish were released on the spot. Tom is a very good fisherman and conservationalist. He had been off with trolling motor problems but is back strong now. He reports Hogdes Marine in Bull Shoals did a fast job on his trolling motor, it works great and he recommends them. They are nice people. James Soltysiak is back from Missouri and catching fish already. He and Mike Eakle caught some nice ones this morning. It is nice to have warm weather again even if the nights are still a bit cool. Debbie, Dave and Bryan finished resurfacing the pool deck yesterday and it looks beautiful. It should look good at $160/bucket and we have used eight of them already.  The basketball court is next and then painting the rest of the pool and then we are hopefully done. Too many improvements and not enough money. It is a good thing that we have been very busy here to keep things going. We all are very proud of Blackburns Resort and Boat Rental and hope you will like it when you get here. We know you will like the price and no increases.