Caught on a Jerk Bait. The picture does not do it justice. 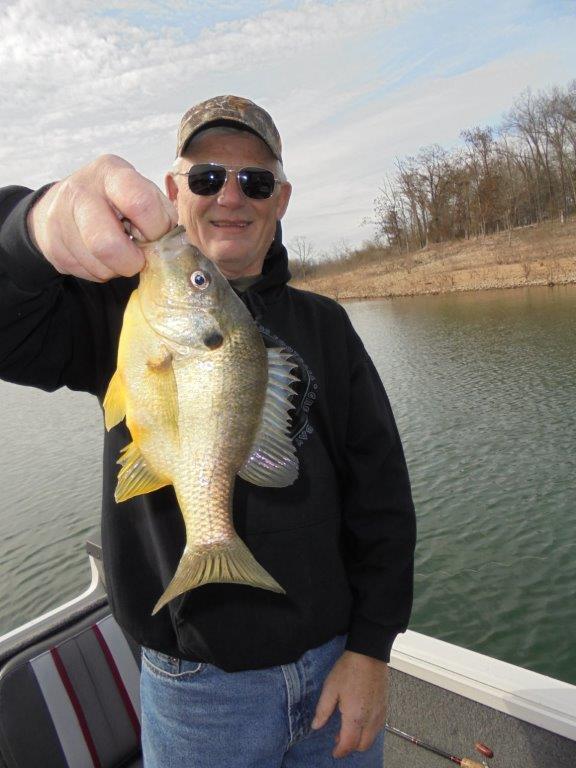 The lake level is 552.96 and has risen 2-inches in the last 24-hours with no generation. The minimum flow siphon is down and they did crack one generator open for a few minutes. They probably did it to keep it from rusting shut. The White River at Newport remains at 8+ feet. It has rained a little bit and they did not have to shut generation down like they usually do when it rains because it was already 0. We have a chance of rain for the next few days. Bink reports that he found fish part way back in the creeks where the shad were dying and the birds were feeding hard. He caught mostly bass on both the spoon and the jerk bait. Fishing was overall not the best but at least he caught some. The ones caught were stuffed with shad and did not bite because they were hungry. He found no fish on the main lake and none on brush piles or in the backs of creeks. Just between 1/2 and 3/4 way back. The shad that are dying or stunned are at the mercy of the wind so which way the wind is blowing will tell you where to look first. I personally believe every fish in the lake are following the stunned or dying shad now and you just have to present something that simulates that to have a chance to catch anything. When the water warms and the shad stop dying and they get cleaned up things will change. The full moon tomorrow will not help anything either. Maybe the cloudy weather will help a little. Early March weather can be very variable with a lot of fronts coming through and it is not my favorite time to fish especially after a shad kill but I will be out there anyway and let you know when things change. If it was easy, everybody could do it. Bass are the best bite now.